Well, OK. This month is probably going to be short a theme week. Luckily, it seems to have warped itself into a sort of "ethics week" devoted to making you think. That problem smoothed itself out. Enjoy...or don't, depending on whether you enjoy thinking or not.

One of the chief tenets of animal rights is that animals feel pain. They suffer just like humans, and as a rule, it's good to minimize suffering.  Animals used for meat lead particularly dreadful lives in factory farms unless stated otherwise. Again: Suffering = bad, especially since humans have consciences.

So what do we do if plants can feel pain?

Mimosa pudica is usually marketed as a "sensitive plant." Numerous other names are cited in the video. Outside of novelty marketing, it is native to tropical Central and South America. It has since been spread to every other place with that climate as well.

M. pudica exhibits rapid plant movement. Like something out of Avatar, those leaves fold inward when faced with any sort of stimulus. Just touching these plants is enough to make the leaves curl. The reaction to fire is particularly dramatic. Nobody knows exactly why the plant evolved this way, but the current theory is that it is some sort of predator deterrent. 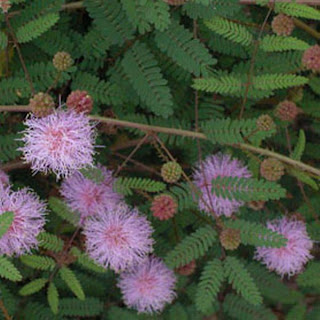 M. pudica has uses beyond being fast. Chemicals in mimosa have been found to be helpful against larvae of the roundworm Strongyloides stercoralis, which causes abdominal pain and diarrhea in infected individuals. Aqueous solutions may also dull the effects of the chemicals found in the venom of the monocled cobra. Freakish and can cure snakebite? HM, I may have to invest in some.

Not all plants are as sensitive as Mimosa pudica. Does this mean that they can't feel like a sensitive plant? They probably can, but they do not react as quickly. Letting dogs vote sounds pretty ridiculous; will "let corn vote" be next? Honestly, their vote would outweigh the entire population of the United States and count for about as much!
Posted by KuroKarasu at 11:57 PM