Admit it: the robot apocalypse is nigh. Google replaces some of your brain; everybody has an iPhone or a Samsung something or other; eventually, we will all be barcoded and scannable. We may even be approaching something called the "Singularity" - a point when every mind on Earth exists not only in the flesh, but also as a digital copy. Once this happens, say goodbye to free will. Just be glad the robots aren't after our blood.... 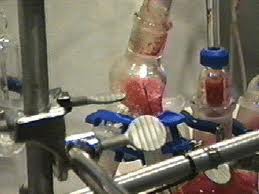 The robot above is part of a setup called A-positive.  It was done by Eduardo Kac and Ed Bennett in September of 1997. It was made for the ISEA art exhibition in Chicago. They call it art; I call it another reason to avoid needles and robots.

A-positive is the only robot with a working circulatory system. In exchange for human blood, it injects humans intravenously with dextrose (sugar). The oxygen broken down in the process fuels a tiny flame symbolizing the force of life.  It needs a human donor to keep the 'nanoflame' stable.

The idea behind A-positive was not only to think about the technological penetrating flesh, but to show that a human-robot relationship is not necessarily apocalyptic. Instead, this robot is symbiotic with humans; the robot gets blood, the human gets sugar. If anything A-positive works in the human's favor - that flame needs human blood to burn, but dextrose is just one of the many sugars we can metabolize.

This brings up an interesting question: Is the robot apocalypse really inevitable? If the Singularity does occur, might not the replicated hive mind have a sense of ethics? Can a machine have ethics and morals if it really does advance beyond humans? All good food for thought!
Posted by KuroKarasu at 11:34 PM