Picking up where my rant on the strangely positive silver lining of the exotic pet trade left off, a nice video on YouTube just added another member to the list of "extinct in the wild, but has a breeding captive population." Surprise, surprise, it's...a crow?! 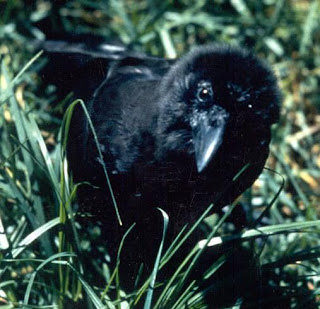 Yes, the Hawaiian Crow (Corvus hawaiiensis), AKA the 'Alalā, is one of the most endangered animals in the entire world. Like most crows, these are omnivores with a preference for eggs and insects. They are usually heard making a bizarre caw mixed with a meow, but that weird call is being heard a lot less lately. The crow is sometimes treated as a deified ancestor; that has not kept it from going nearly extinct.

All of the Hawaiian Crows in Hawaii today have been captive-bred. Even then, 21 of the 27 CB crows died almost as soon as they were returned to the wild. They're so rare that they're extinct in the wild except for the sparse captives that have been released. Those are at risk of being food for Hawaiian hawks, so really, the population's still under considerable threat. Yes, these are still versatile, resourceful, intelligent crows we're talking about.


The strange thing? Nobody knows exactly why this crow has gone completely extinct in the wild. Feral pigs, rats, and mongoose have all been cited as culprits. Microscopic nemeses include avian malaria, fowlpox, and Toxoplasma gondii, AKA the protist that causes crazy cat ladies.The Hawaiian hawk also eats these birds, but that's a natural predator.

As people who are not on islands, we tend to take crows for granted.  They really are valuable scavengers. Even disease-bags can be hit with nasty parasites, eaten, and have their habitat destroyed. Don't take any animal we have for granted. You never know what might affect them.
Posted by KuroKarasu at 11:57 PM