"They Actually Eat That:" (Pattypan) Squash.

Luckily, today's "They Actually Eat That" isn't too terrifying. In the face of a week of things that will leave your mind reeling with how terrifying they are, squash seems relatively tame. But hey: It's Halloween. Pumpkins happen to be a type of squash. Deal. 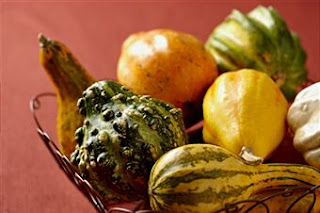 First off, cool as pumpkins may be, there are a lot of cool squashes out there. Squashes in general are New World fruits, and are considered one of the Three Sisters (major crops) along with the corn and beans cultivated by Native Americans.That said, they probably also fall under the category of "things used in foreign cuisine that you didn't know were from the Americas." Hey, that's actually a good article idea.

For purposes of this blog, however, a lot of squashes just look weird. They're knobbly, bumpy, twisty things. There are some advertised as looking like snakes. They're almost like the token alien fruit. You could paint a squash blue, stick it in a sci-fi B movie, and nobody would ever be able to tell that fruit was from Earth. 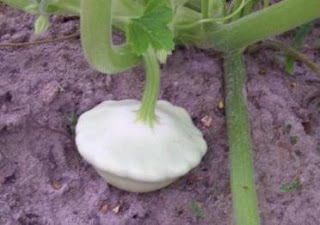 Pattypan squash (Curcurbita pepo)  just looks like a UFO. As the name would imply, these are small squash that can be fried in the same size pan as a hamburger patty. This actually led me to buy some out of curiosity. There were a few recipes online, and I thought that some sort of unique flavor would come with the unique appearance.

I was wrong: pattypan squash has no taste whatsoever. Pumpkin and zucchini have flavors; pattypan has a flavor so faint it's an anti-flavor. All of the flavoring comes from whatever you drench it in. The recipes are good because of the butter and herbs added to the squash. Not that I liked squashes to begin with, but I was expecting...a flavor. It's one of those things that I'm stunned people eat simply because it did not agree with me. (For the record, I don't like pumpkin either, but I can see why people like the flavor; here, it's more like liking the sauce than the squash itself.)  No offense meant; the fruit still looks amazing, and would make an awesome decoration.

I think I'm starting to get a grudge against the whole squash family. Be right back; Christmas mint spree is just around the corner.

Email ThisBlogThis!Share to TwitterShare to FacebookShare to Pinterest
Labels: plants, squash, They Actually Eat That