They Actually Eat That: Tilapia.

Fish has a weird cultural line going on with it. Some people consider it meat; others don't. There's a thing called "pescetarian" in which fish is OK but other meat is not. It's a weird line, and, as time goes on, an easily crossable one. As people learn of the horrors of factory farming, more and more of them will avoid meat. That leaves seafood as the next target to exploit.

Tilapia is the most common labeled fish on supermarket shelves. Originally, they are a type of cichlid native to various parts of Africa, probably making them the most populous African cichlid in the world. Dismiss your images of people hooking wild-caught tilapia right now; this omnipresence reeks of "bad for you." Let's see why, shall we? 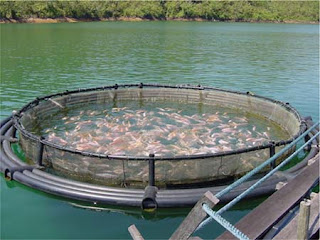 First off, all fish has some level of mercury in it. While fish can still be seen as an alternative to white meat, it is no longer the holy grail of healthy flesh that it was once thought to be. Tilapia in particular has low levels of the things that make fish good for you, like Omega-3 fatty acids. It's just a tasteless white that sells well in cafeterias and schools. Brain food it is not.

Onto tilapia, then. If you buy fish sticks or any other "mystery fish," chances are that it is either tilapia or Alaskan pollock. I hesitate to say anything about Alaskan pollock. Both fish taste like white. Both fish probably have the same problems. This aaaalllllll loops back to corn, guys.

Most tilapia are farmed. The farms are usually located in places like Malaysia or Honduras - far away areas where people will do all sorts of not-quite-ethical things to make a living. The difference is that pigs, cows, and chickens are cute, and fish are generally not.

Tilapia are so plentiful because they feed really, really well on corn and soy. They take pellet food regularly, and, like every other farm animal, gain weight quickly. They are factory farmed, just like chickens. Hell, they've been called "aquatic chickens" because their white meat is really just about as good as chicken is for you.

It gets worse: They're trying to get salmon to feed on corn, too. Neither salmon nor tilapia are meat to eat grass, let alone the mutant grass we call maize. Go ahead, look at a mature male salmon and tell me that this thing is meant to eat corn. I dare you.

Email ThisBlogThis!Share to TwitterShare to FacebookShare to Pinterest
Labels: fish, They Actually Eat That