Theme Week for September: Who Let The Dogs Out?!

For those of you who have not been following this blog for very long, I am not a dog person. In fact, I think there are some examples of severe insanity among dog owners in particular.  The video above covers just one of my major bitches (pun intended) with dog people. It's like dogs are Jesus or something. There, I said it; props to the random person on Twitter who put my bile for the dog's seeming Mary Sue-ness in our society into one succinct phrase. It's not that I hate dogs, it's that people get insane concerning dogs.

Now, mind, I know a few people with dogs. Some of them are perfectly nice people. My best friend still talks about her deceased dog Bruno just like Foamy described; that's an issue, but I would call it the tip of the iceberg. No, it's these people I have a real problem with: 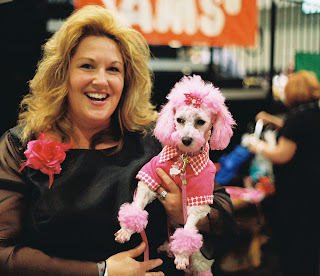 In recent years, the dog has become a total commodity. We now have a wealth of products assuring you that your dog can color-coordinate with whatever you happen to be wearing: doggy clothes; doggy birthday cakes; doggy nail polish; doggy hair dye. Dog yoga is also apparently a thing ("doga"). I'm fine with giving dogs treats, but this is disturbing when you think about it. It's overanthropomorphizing to an unhealthy degree. Yes, all pet owners do this on some level, but it borders on madness with dogs. As if to add insult to injury, this is especially prevalent on smaller dogs- dogs that already come with problems.

Mind, the early people got really lucky when they managed to domesticate the first wolf. They happened to find an animal that could not only recognize people as alpha, but had quite a few other behaviors in common as well. It also happened that wolves had an extremely versatile genome (bigger than the human genome by a LOT- 23 chromosome pairs in humans versus 39 pairs in dogs) that allowed for a great variety of breeds to flourish over the centuries.

But where did we get off turning wolves into this?

There are some dog breeds that just make me go "why?" I've already done an entry on Chihuahuas, the most "why would you do that?" dog in the entire world,  but there are still so many more dog breeds out there that make my mind reel with WTF. Many of them have already been covered. This is just picking up more freakish scraps. Just because we can mess with the canine genome doesn't mean we should.
Posted by KuroKarasu at 11:48 PM

Email ThisBlogThis!Share to TwitterShare to FacebookShare to Pinterest
Labels: breeds, canidae, dogs, mammalia, mammals, Who Let The Dogs Out?