Who Let The Dogs Out: Komondor.

You may have noticed a trend for this week: Small dogs tend to be weird. Versatile as the canid genome may be, abusing it is not without its faults. The weirdest dogs also tend to be from China, but that's beside the point. 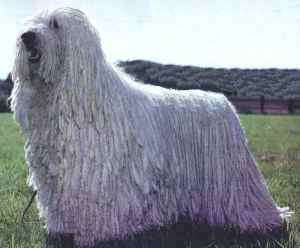 As if to prove that not all weird dogs are small, we have the Komondor. This guy looks similar to the Puli, another Hungarian dog with a mop for fur, but is quite a bit larger. The breed has been recognized by the AKC since 1937. Although not quite Chinese, the Komondor's ancestors do hail from Tibet.  It's still cool enough to be one of Hungary's national treasures.

The Komondor's coat consists of white cords that look like albino dreadlocks. This was originally used to prevent bites from wolves that would attack sheep flocks; no matter how cool wolves are, they just can't bite through an organic mop. The moppy coat can only be white in a Komondor, so if you want black or grey, try a Puli. No, they do not come in pastel pink or any other color that would suggest that they can be treated like Crimp n' Curl Cabbage Patch Dogs. Even the Puli would be slightly offended by that; Komondors are even more serious business.

Komondors are guard dogs. They do not even need to be told to guard sheep and cattle. There is a saying that a Komondor might let an intruder into the house, but will never let them out, leaving the helpless soul pinned under the dog's weight (which can be upwards of 80 pounds). They are always wary of strangers. That said, early socialization of these dogs is a must.

Aside from their protective temperament, Komondors have very few health problems compared to every toy breed ever. The main problems are with the eyes, including cataracts and inversion of the eyelid. Bloat is a problem in all large dogs. Due to the heavy coat, parasites are common. That coat also requires a lot of maintenance. Budget accordingly.

Komondors may look silly to us, but they are not goofballs. The breed has the ability to think independently and has been praised for its strength, valor and courage over the centuries. They are still pretty popular today, especially for shows and livestock hunting. Don't let the haircut fool you; this dog will not back down from wolves.
Posted by KuroKarasu at 9:31 PM

Email ThisBlogThis!Share to TwitterShare to FacebookShare to Pinterest
Labels: breeds, canidae, carnivores, dogs, mammalia, mammals, Who Let The Dogs Out?