Is it me, or is the wonderful group of Chiroptera horribly underrepresented? If there is a bat in a movie, chances are it is one of the following: 1. a fruit bat, 2. a vampire bat, 3. a random microbat that we're supposed to believe is a vampire bat. There are so many other neat bats out there. Why no love? It's the rabies thing, isn't it? C'mon, you can be honest, here. 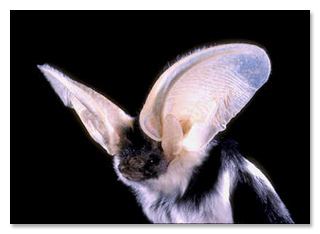 The spotted bat (Euderma maculatum) is one of the bats that should get more attention. It is a microbat, meaning that it uses echolocation to hunt for insects. These bats are native to the American southwest.  They aren't too big, they don't drink blood, and they won't get in your hair. They're just cute fluffballs with a trippy pattern that eat mosquitoes for fun and nutrients.

I know you're all tired of me saying this, but...look at it. It's fluffy with three white spots on a black coat. It has amazingly large ears - the largest, proportionately, of any bat. We like big ears on kittens, so why not bats? This is probably as colorful and cute as bats get. 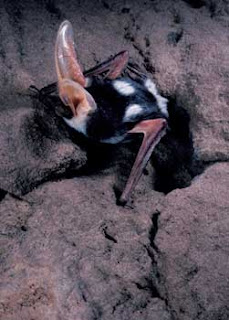 The exact abundance of spotted bats is unknown. When it was first discovered in 1865, only 35 specimens had been catalogued. It was thought to be endangered. DDT supposedly added another nail in the bat's coffin. Now, we think that the bat is far more abundant than previously supposed.

This is a bat that should be a cute cartoon character. I'm not ashamed at all to have a plushie of it. Bats can be cute flying fluffballs (see Woobat) or just nasty rodents with wings. Remember, any bat that gets in your hair got there by accident- they aren't all rabid, malicious bloodsuckers.

P.S.- if you ever happen to be in Rome at night, look near the lamps. It's quite fun to "batwatch" there. No spotted bats, but still.
Posted by KuroKarasu at 11:34 PM