Who Let The Dogs Out?: Pugs.

Humans have a very weird definition of "cute." Generally, if it has big eyes, a nearly-flat face, and a short body, it fits this definition. Animators figured this out a long time ago. There are several guides which can tell you, in scientific detail, how to design a cute character. It's really kind of creepy how well they have this pegged.


Pugs are wrinkled, little dogs who fall under the "toy" header. Generally speaking, they are small, stocky, "squarish" dogs with wrinkly faces and almost no snout. We're pretty sure pugs came from China; they may go back to 551 BCE if Confucius was indeed describing a pug. Some records say that they've been around even longer.They look a lot like the same "lion" that the Pekingese were pointed towards, only not as furry and not as spoiled by a certain empress dowager. No, they were meant to guard Buddhist monasteries.

The pug is usually summarized thus: multum in parvum, or "a lot in a little." They have a lot of personality for a small dog. They are outgoing, playful, and eager to please. They can, however, be rather stubborn as well, and require a healthy amount of exercise. Personality-wise, they are a good match for most people. 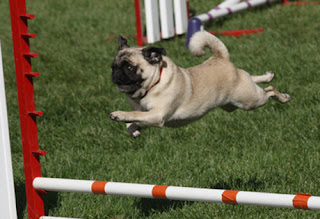 So, what's not cute about that? The combination of facial folds and large, bulging eyes creates an uncanny effect. Also, if you look at clips on YouTube, you hear pugs snorting. Indeed, pugs do have respiratory issues; they also have a million eye problems from the shortened skull and overheat really easily. There are also a few pug-exclusive diseases, including necrotizing meningencephslitis - inflammation of the brain and central nervous system. Cute comes at a price.

Pugs are one of those dogs that I, personally, look at and go, "are these really worth it?" These guys are not as notoriously aggressive as Chihuahuas, but they do come with a laundry list of problems. They sounds like good companion dogs...if you can handle the extra care involved. You mileage may vary on cuteness. Still not too bad for a dog made in China.
Posted by KuroKarasu at 11:58 PM

Email ThisBlogThis!Share to TwitterShare to FacebookShare to Pinterest
Labels: breeds, canidae, china, dogs, mammalia, mammals, Who Let The Dogs Out?