"They Actually Eat That:" Kiviak.

A lot of people seem to think that humans have weak stomachs.We hear that wolves can eat things that have been dead for weeks and go "ooooh." This gasp of awedoes not take into account the sheer variety of things that humans can eat. Chocolate is poisonous to most other animals, for example.

Well, guess what? We can eat things that are rotten. We just call it "fermented." We don't just eat rotten things - we eat rotten art! Cheese and wine are fine examples. There are some that sound far less savory, however... 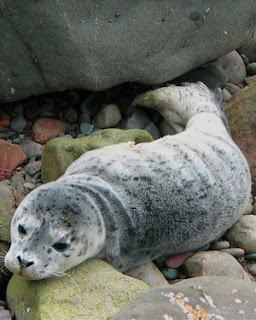 Kiviak is a Christmas, wedding, and birthday dish from Greenland. From this alone, one can tell that 1. this will not be "normal" meat and 2. it is definitely cuisine. It is eaten by Inuit peoples around the Greenland area in the wintertime. Hoo boy is it special, too.

Kiviak has a simple, yet somehow utterly disturbing recipe: 1. Skin a seal;  2. catch 400-500 auks and sew them into the skin of said seal;  3. wait several months, then remove the seal from the rock you hid it under. Yes, that's what kiviak is: auks stuffed in a seal skin, hidden under a rock for a looong time. I've gotta wonder who first went "hey, let's put birds in a seal carcass for seven months and see what happens!", but that's the tip of the iceberg when it comes to kiviak.

The other nasty part is how you eat the auks: bite off the heads and suck out the guts. The innards have, by this point, been liquefied into a tart pulp that can easily be slurped. It supposedly reeks just as much as some types of cheese, but luckily, tastes pretty good, too. After taking birds out of a dead seal, it's hard to get any nastier, so we're glad there's a silver lining to the seal skin.

People have been doing fermented cuisine like this for a looong time. There are whole catalogues of fermented foods, many of which smell awful. It's a method of preserving food, which is always nice to develop. Given the choice between this and lutefisk for preservation, well...kiviak is all-natural.

P.S.- This entry has been brought to you by Moyashimon, the unholy master of all things fermented.
Posted by KuroKarasu at 10:40 PM