"They Actually Eat That"/Who Let The Dogs Out: Hot Dogs and Dachshunds.

You're probably thinking that this entry is some sort of bad joke. I already did an entry on eating dogs, after all. This was just my corny attempt to fit "They Actually Eat That" in with the theme week. I don't need to make many more bad jokes; dachshund owners do it for me. 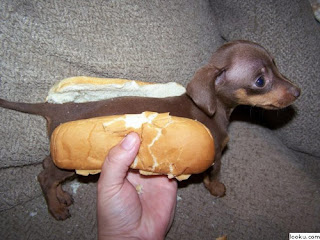 For those of you who assumed "wiener dog" could not possibly be the right name for a dog breed, the proper title for sausage-like dogs is "dachshund."  The breed could date all the way back to ancient Egypt, but the first confirmed dachshund was recorded in the 1700's. They are now so closely associated with Germany that the 1972 summer Olympics in Germany created a dachshund mascot.

The dachshund's shape is deliberate. It was meant to hunt badgers (with the name meaning "badger hound"). That long, narrow, pointy shape fits perfectly into a badger burrow. The front paws even help for digging! There are also some mini-hot dogs bred to hunt rabbits. The pet dachshunds are usually "tweenies," or wiener dogs somewhere in the middle of the two sizes.

Believe it or not, there actually is a relationship between dachshunds and hot dogs. A German concession seller at the polo grounds in New York first called sausages in a bun "Dachshund sandwiches" sometime in the early 1900's. Supposedly, a New York Post cartoonist could not spell "dachshund," so the name "hot dog" stuck instead. That said, hot dogs themselves are mystery meat coated in bacteria that might make you sick if not cooked and cause cancer if consumed too often, so please avoid them whenever possible.

The strange shape of the dachshund is not without its price. There is a spinal disc malfunction so specific to dachshunds that it's dubbed "Dachshund Paralysis" by most people. Dachshunds are lazy in old age, leading to obesity, diabetes, and all those other nice things doctors warn you about. Demeanor-wise, they are also prone to being brave to the point of recklessness, disobedient, and downright aggressive if not properly amused. E.B. White had quite an experience with his own dachshund, Fred, who "even disobeys me when I instruct him in something he wants to do." Not a beginner's dog by any means.

So, next time you see a furry little sausage at the park, bear the following in mind: 1. Dachshunds  were meant to hunt badgers, easily among the meanest furry mammals on the planet; 2. they are almost synonymous with Germany, a place known for meat, beer, and Rammstein; 3. they are aggressive, assertive little buggers who do not know what it means when you are bigger than them. Have fun sticking them in hot dog buns, now.

Email ThisBlogThis!Share to TwitterShare to FacebookShare to Pinterest
Labels: breeds, canidae, dogs, europe, mammalia, mammals, Who Let The Dogs Out?