It definitely feels like fall here in Chicago. Things are getting colder. Leaves are falling. Halloween stuff is available in stores everywhere. I can't hate fall because I really hate winter, but it is when things start to get depressing. 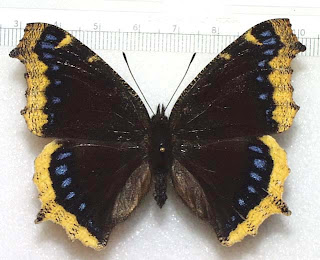 Then I see one of these, and still can't help but wow. That's a Mourning Cloak (Nymphalis antiopa), a large butterfly native to North America and northern Europe. There have been some reports of them in Britain, but they are few and far between.They can be found far outside of their range during migration.

A flutter-by look does not do this butterfly justice. Not only are Mourning Cloaks big with distinct markings, but they're part of a group of butterflies called "brushfoot butterflies." If you look at a Mourning Cloak in detail, it looks like they have only four feet. The last two are there, but so vestigial that they have been reduced to brushes. Don't worry, nobody plucked them off.

If you don't think the butterfly is impressive, the caterpillar certainly is. It is also called the "spiny elm caterpillar." Like many caterpillars, the spiny elm puts all Hot Topic customers to shame with its spikes and outlandish orange spots. They often feed in groups, defoliating whole leaves before moving on to the next. Although, hey, nobody likes having their trees nibbled, these caterpillars are rarely problematic enough to warrant pest control. Just remember that they become awesome butterflies.

Winter does not do a thing to Mourning Cloaks. Like less-masculine bears, they enter diapause (i.e. hibernate, effectively) until spring warms things up. They are literally among the few insects to survive winter in the Midwest. Instead of flower sap, they feed on tree sap after awakening. Clever butterfly is clever and has found a niche all its own. Good going, Mourning Cloak; now keep impressing me until winter hits!
Posted by KuroKarasu at 11:29 PM