Hahaha. As I've been finding out recently, easier said than done. We have bedbugs or something else. I want to say that it's some sort of mite, but for now, let's look at bed bugs. (I will make another entry on mites if need be.) There is more to them than meets the eye. 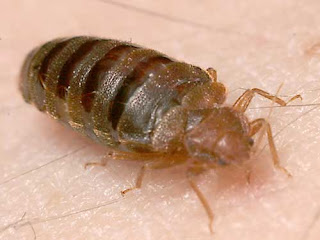 The term "bed bug" usually refers to Cimex lectularius, the common bed bug that feeds on human blood. It can, however, refer to any member of the genus Cimex or even the whole family Cimicidae. Bed bugs are found everywhere and have been feeding on humans for millennia. Don't feel too bad about finding them in your house - you're just a few generations behind.

The bed bug has to be one of the most durable little insects ever. They do not really care how hot or cold things are; too cold and they just hibernate. Bed bugs do not care whether your house is clean or dirty. All they want is your blood and a place to hide and reproduce in. That's really all they need: Food, shelter, and sex.

All bed bugs mate through something called "traumatic insemination." While taking that literally might just translate as "rape" to most people, it is a very special kind of rape in scientific circles. Some animals do not have openings for a penis to go into, so the male inserts himself wherever he pleases into the female's flesh (and thus blood). That is how bedbugs get knocked up: by having the male pierce the female's exoskeleton with his hard-on. Face it: Even the kinkiest people wouldn't find that kind of penetration sexy.

So, how do you know if you have bed bugs in your house? Well, seeing one or getting repeated blisters for no good reason are fairly sound signs. Dead bed bugs apparently smell like raspberries, so if you aren't a fan of raspberries and randomly smell them, that's a pretty good hint, too. Get an exterminator; they might even bring a bed bug-sniffing dog along. Bed bug attacks have been on rise rise, so have the number handy. Just remember that the females get a really raw deal.
Posted by KuroKarasu at 11:00 PM