The average human psyche has exactly two images in mind in regards to felines: big cats, like lions and tigers, and domestic cats. The small- and mid-sized wildcats are often overlooked. That's a shame, because a lot of them are really neat. 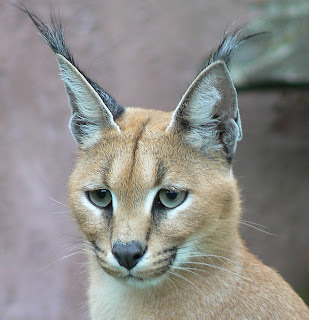 Enter the caracal, one of the most striking of the little cats. If you took a lynx and exaggerated its ears and tail, you would get something that looks like a caracal. Caracals are native to much of Africa and the Middle East, and the name derives from a Turkish word meaning "black ear." Although it looks related to lynxes, it is closer, genetically-speaking, to the African Golden Cat and the tabby cat down the street.

The ears are the most noticeable part of the caracal. They have long tufts that make lynxes jealous. Although nobody knows the exact purpose of those tufts,we have several theories as to why they exist. On lynxes, the ear tufts function almost like radio antennae, helping the cat to hear. They might also help break up the outline of the caracal's head. 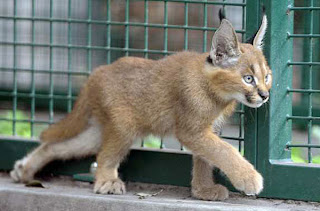 There's more to caracals than just the ears. Their paws have stiff hairs that probably allow them to walk on the sand, sort of like snowshoes. The caracal is also known for snatching birds in mid-flight - sometimes many birds at once! They also get most of their water from their prey, and domesticate surprisingly well.

Caracals have been in human company since ancient times. India and Iran both have a good history with these cats. The Persians were fond of using them to hunt pigeons. They can kill up to ten pigeons in one hunt! Yes, these cats have been exotic pets for a very long time, and remain pretty popular today. 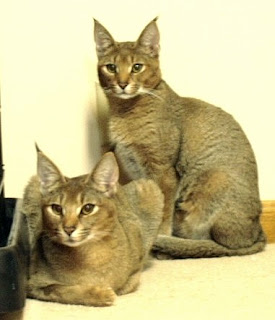 Keen observers probably noticed a while back that caracals look a looot like house cats; yes, the two can make babies.The Moscow Zoo tried it, and caracal-cat hybrids can be found in captivity as well. "Caracats" have many of the same traits Savannah cats do - larger size (12-14 inches at the shoulder, 25-30 pounds) and fertility issues in the males. (For those curious, yes, servals and caracals can breed, too.) They usually use Abyssinians as a domestic base. F2 (second generation) caracats still have the attractive ears of their wild relatives and make better pets than F1 hybrids. Above is a caracat kitten for your squeeing pleasure.

That said, this month's Theme Week is going to be a doozy. I'm a cat person,  darnit!
Posted by KuroKarasu at 1:10 PM