If this little owl did not make your heart melt or your eyes pop, then, again, you must be some sort of cyborg.

Popo-chan up there is a Northern White-Faced Owl (Ptilopsis leucotis). Like all owls, these birds are nocturnal and feed primarily on rodents. It lives in the areas between the Equator and Sahara of Africa and is not endangered at all. (Good, I might want one for a pet at some point.) 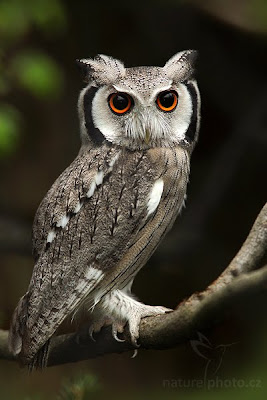 Although there is nothing particularly unique about the Northern White-Faced Owl except its defense mechanism, boy is it a doozie! This owl has become quite popular in Japan due to the above video and it is easy to see why:

YOU say no to that face. From Sora no Woto.

(Actually, they are quite fond of owls in general over there. One word for 'owl' is a homophone for one of the words for 'happiness.' There were little owl trinkets EVERYWHERE when I went there!)

As the video demonstrates, this owl can take on two VERY different forms depending on what type of enemy it is facing. When faced with a slightly larger owl, the White-Faced makes itself look MUCH bigger:

BOO! Sorry, I have another animal for Halloween.

When up against a considerably larger owl, Whitey will do the exact opposite thing: Mimic a dead branch by essentially shriveling itself. You would think that the moving gaze of a dead branch would give away the fact that there is more to this owl than meets the eye, but damn if it doesn't look like a vampire when in this mode: 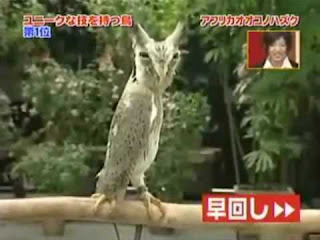 Now we know why owls are named after blood-sucking night demons, eh?

MORE THAN MEETS THE EYE!
Posted by KuroKarasu at 9:20 PM