Oh, crap. Not ANOTHER thing we have to fear from the ocean!

Actually, this one's relatively harmless. The sea lizard (Glaucus atlanticus) will not eat you unless you are a cnidarian or fellow slug. This creature is not to be a confused with lizard fish; the sea lizard in question here is a small, blue sea slug native to most of the world's oceans.

Sea slugs have been blessed with such a variety of shapes and colors that even perfectly sane people wonder what they're tripping on. For starters, all gastropods are hermaphrodites - they have male and female junk. If that was not trippy enough, name a color; sea slugs come in it. Name a type of locomotion; sea slugs can do it (or at least look like they're doing it). Name a land animal; it probably has a counterpart in sea slugs. All things said, they are AWESOME creatures that I am ashamed for not doing an entry or five on earlier. (I do not know HOW, but Pokemon managed to de-awesome them.) 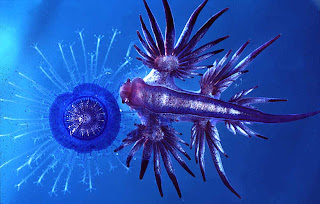 DUDE I CAN TOUCH THE RAINBOW! IT SMELLS AWESOME!

These particular sea slugs have gills that look like feathery feet or fins alongside their bodies. They swim upside-down; the name 'gastropoda' means 'stomach-foot,' and this thing is walking on its back like something out of a horror movie 24/7.

Now, hold on a second...aren't colorful things usually poisonous? In this case, yes and no; many sea slugs, these guys included, gain toxic attributes from their food. G. atlanticus in particular feeds upon the stinging tentacles of the Portuguese Man o' War (Physalia physalis)- a cnidarian colony (not a jellyfish) known to be deadly to humans. The Glaucus is completely immune to its venom. Like in some caterpillars, the poison in the tentacles gets used for the sea slug's own defense.

Look, but think before you touch. Enjoy the acid.

(By the way, fun fact: The generic name for 'Glaucus' comes from the myth of Glaucus and Scylla. Look it up if you like; Circe's involved!)
Posted by KuroKarasu at 8:30 PM