Who's That Pokemon?: Munna and Drowzee Lines.

Ever notice that Pokemon has a thing for tapirs that put people to sleep? There was Drowzee -> Hypno in Gen I, now the Munna line in Gen V. What gives, Nintendo?

More importantly, what the hell's a tapir?

Tapirs (genus Tapirus) are piggish mammals related to rhinoceroses and horses - odd-toed ungulates, AKA 'perissodactyls.' They are small for relatives of giant perissodactyl mammals; 6-8 feet long is tiny compared to elephants and rhinoceroses. They are found in Central and South America, as well as Southeast Asia. All tapirs are in danger of extinction. 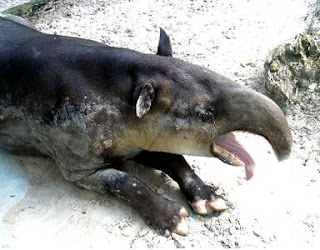 The shnoz common to all tapirs gets one's attention right away. It makes the tapir's skull unlike that of any other mammal; every skull abnormality exists to make that proboscis work. This appendage, like a miniature elephant trunk, allows the tapir to grab vegetation that it could not reach otherwise. A tapir's sense of smell is terrific because of its extended nose, but its sight (like that of the rhino) is sub-par.

Drowzee (most closely) resembles the Malayan/Asian tapir (Tapirus indicus), the largest tapir species and the variety with the longest nose. On the other hand, Munna and its evolution look like tapir-shaped piggy banks. There are reasons why some people object to the Gen V Pokemon; given that they made a particularly mundane tapir that would probably make a GREAT cell phone dangle, I'd say that Nintendo has pretty much run dry on ideas.

Still, what's up with the similar sleep theme?

Sleeeep. I'll see you in your nightmares...which I will then devour.

What does this weird rhino relative have to do with sleep? Japanese mythology tells of a creature called a baku, pictured above. It looks very similar to the tapir and eats bad dreams. Although some of Drowzee's PokeDex info makes it sound malignant, the baku is rarely a bad creature; images of a baku can be used to devour nightmares or ward off bad dreams altogether. This creature and the zoological tapir share the same name in Japan, which naturally leads to many more baku monsters than just those two Pokemon. 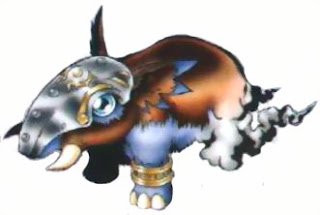