"They Actually Eat That:" Loach Hell

Tofu is one of the big foods in the snake oil-pandering health food business. It is essentially 'soy cheese' - fermented soy protein curdled into a solid chunk. The result is often used as an alternative to cheese and ice cream made from cow's milk and is basically thought of as one of the healthiest Asian foods around.

How can you screw that up? By putting loaches in it. 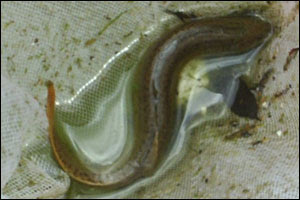 First off, just what is a loach? A loach can be any number of fish found in the order Cypriniformes, but usually refers to fish of the family Cobitidae. They are not particularly impressive fish by any means, although I am sure that one day a loach will make it onto this blog. You know, except for this entry...which involves harming several baby loaches at once. 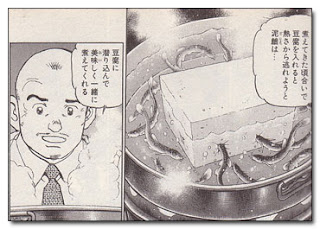 In this case, you guessed it, we are talking about putting baby loaches into tofu. They swim into the tofu to escape the boiling water, only to slowly die anyways. Their rapid squirming creates holes that resemble those of Swiss cheese within the tofu. (Should you desire that effect, this is not the only way to do it.)

They actually eat that?!

Nobody is really sure about this one. There are people who say it's true and others who say that it's false. We think it originated from a Korean restaurant only to be botched by would-be loach eaters in Japan, but some people say that there are sparse specialty restaurants that serve this hellish tofu. There is something called 'loach hot pot' that definitely exists and is just as sadistic. If his weird tofu does exist, it's rare; if not, it has more truth behind it than some of Ripley's stuff. 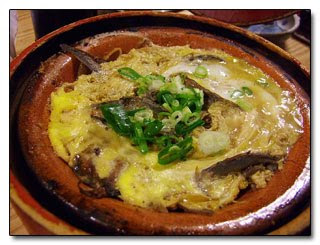 Loach hot-pot is JUST as nasty.

Is it plausible? Well, it's no weirder than anything else that has ever appeared on this column...
Posted by KuroKarasu at 9:25 PM