Y'know the phrase "When pigs fly?" If not, it means that something is impossible, or at least extremely unlikely. All sorts of things fly in nature; pigs are usually not one of them.

OK, OK, that's technically gliding, not propelled flight. Flying fish (family Exocoetidae) use their long pectoral fins to glide like airplanes (which they helped inspire) over the world's oceans. Given how far these fish fly, it may as well be the real deal.

Take a guess. No, really; guess how far a flying fish can fly.

Did you guess somewhere around 50 feet? How about 100 feet? It's even farther than that.

The longest recorded flight of a flying fish is 160 feet - approx 50 meters for you metric people. Flying fish can stay airborne for 45 seconds; given that they kinda need water to breathe, that's a pretty long time.

It looks more like a butterfly than a fish.

Wherever flying fish dwell, they become culturally significant. Barbados, an island in the Caribbean, has been called the "land of the flying fish." It is everywhere there - coins, food, you name it, there's a flying fish on it. Pollution has since pushed the fish closer to mainland South America, but the flying fish still rule Barbados.

Flying fish live throughout the world's oceans, including the area around Japan. Just like everything else from the sea, the Japanese have found a way to turn the flying fish into something artistic and sadistic. Specifically, flying fish are among the many species that the Japanese utilize the eggs from in sushi. It's called tobiko, if you're curious.

Tobiko rainbow! I wonder how dye affects the eggs...

The flying fish is also one of thew few things that I have ever ranted about here that became a constellation. The constellation Volans used to be known as Piscis Volans - literally "flying fish."

Looks more like a kite to me. Whatever, ancient geeks.

Thus far, nature has yet to evolve pigs that can glide. Thank Cthulhu. 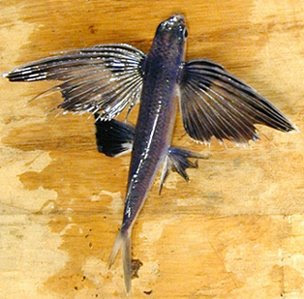 Beyond this place, there be fishies.
Posted by KuroKarasu at 6:03 PM