Oh, hey, speaking of things that look like dinosaurs but aren't, here's a secretary bird. 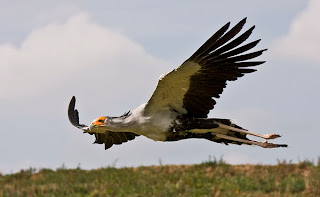 If you want evidence that birds came from dinosaurs, look no further than the secretary bird (Sagittarius serpentarius). This cursorial hunter (remember the Java green?) is native to the plains of Africa. No, it does not take notes for you; supposedly, the name comes from the quill feathers on the bird's head. Its generic name is Sagittarius, "archer," also relates to the bird's head feathers resembling a quiver of arrows.

Disney, you could've shown one of these off in The Lion King. Most badass secretary ever.

This thing is a raptor in both senses of the word: It is both related to birds of prey (called raptors) and looks like a feathered dinosaur. Specifically, secretary birds are related to kites, buzzards and vultures.

The secretary bird is renowned (and, of course, praised) for killing snakes. Unlike the crested serpent eagle from China, secretaries do not just kill snakes - they stomp them. They even go nuts with fake snakes.


Call me crazy for linking a Spanish vid if you like...damn if the baby secretaries aren't cute, though.

The secretary bird also has one of the weirdest bird calls I have ever heard in my life. It's not a whistle, screech or song. It's...it. It sounds almost like a very large frog croaking and I cannot find a single soundbyte of it.
Posted by KuroKarasu at 8:31 PM