Imagine if a deer and a zebra somehow, by some ungodly chance in nature, had a baby. That is only half of the weirdness that went into the okapi.

Stop looking at my butt.

The weird-looking ungulate above is called an okapi. Like giraffes and zebras, they are native to Africa. Instead of the oh-so-loved African savannah, okapi live in montane rainforests; their coat has become water-repellent to deal with the weather. They are herbivores, but consume charcoal and clay for a few extra minerals.

The okapi, despite all appearances, is not related to zebras at all. Their closest living relative is the giraffe. It shows in the okapi's large ears, ossicones (on males), short manes and very, very long blue tongues. The okapi's tongue is about a foot long - long enough to clean its eyes and the entirety of its ears (both inside and out). The okapi is as much a living fossil as the coelacanth. 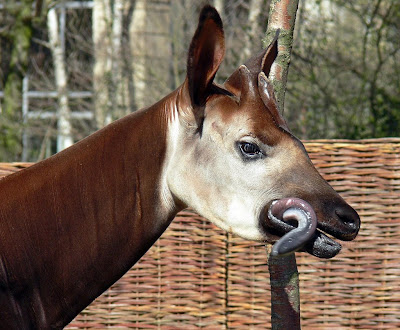 Did this okapi eat yesterday's slug or is he just happy to see us?

The okapi was known by the native peoples of Africa long before the Europeans ever found a single specimen. It was recorded over 2,500 years ago in an Ethiopian carving at Persepolis. It was largely believed to be a sort of "African unicorn." After its discovery by Europeans, carvings and images of it began popping up left and right.

This better be pretty friggin' important. Is the meadow on fire?

These animals, though not endangered in and of themselves, are elusive and threatened by habitat loss. Although they are fairly common in zoos now, I can never seem to catch these guys on display. Sucks.

Or, alternatively...
Posted by KuroKarasu at 9:57 PM