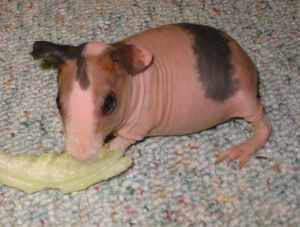 Well, it DOES look more like a pig now.

Remember the cardinal rule with mammals: If it has fur, it's cute. If it does not have fur, it will only have a small cult of people who think it is cute. It will also have PLENTY of movie opportunities because hairless mammals are freaky. 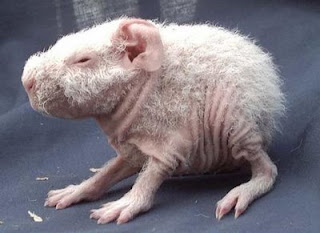 Somehow, having SOME fur makes this thing even creepier.

Skinny pigs originated from a strain of hairless lab guinea pigs (that almost sounds redundant...) which had been used in immunology research. This has raised some questions about their overall hardiness, but unlike hairless dogs, there are not many negative traits linked to guinea pig hairlessness. (Now, from what I can tell, there IS some hidden negative trait that would lead cavy enthusiasts to outbreed to hairy carriers every other generation. I have yet to see the linked defect mentioned.)

Warning: Do not feed after midnight.

There are technically two breeds of hairless guinea pig: The Baldwin and the skinny pig. As the name amusingly implies, the Baldwins have significantly less hair and also sport wrinkled skin. The two strains of hairlessness are not at all compatible.

The Baldwin does not look any less creepy.

The skinny pigs actually have some hair on them; fuzz on the feet and muzzle is normal and a breed requirement. This can lead to some pretty freaky results. Bear in mind, however, that skinny pigs were lab experiments to begin with. That usually does not bode well.

Seriously, though? A guinea pig is one ugly creature without fur. It looks almost like a naked mole rat less accustomed to living underground and without a freakish hive society. Bar the side-effects of having no hair (namely thermoregulation issues), however, they make as good a pet as any guinea pig. 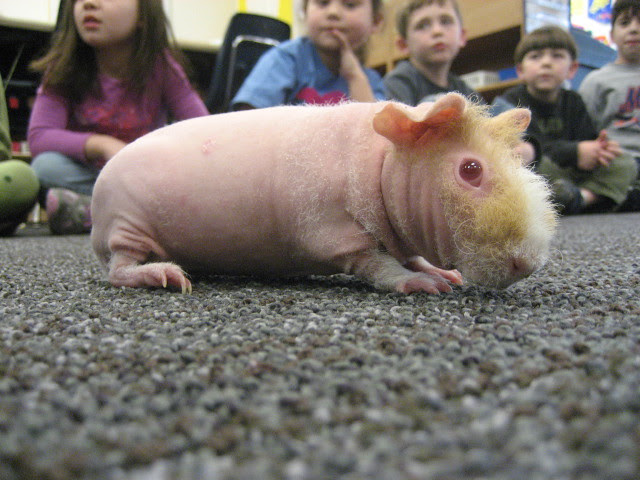