You will be assimilated. Seriously, though, this thing is cute enough to take over the internet.

Mudkip was one of the three Starter Pokemon from Ruby, Sapphire and Emerald (Gen III). It eventually evolves into the powerful Swampert, but as if that was not enough to warrant a massive Mudkip uprising, 4chan turned the cute little bugger into a meme.

Mudkip is classified as a "Mud Fish" Pokemon, leading one's mind to immediately think "mudskipper." Mudskippers (family Oxudercinae) are fish that walk through mud on their pectoral fins, meaning that they are among the few fish capable of living on land. They live in the tropics of Africa and India, although some species range all the way to southern Japan.

i herd u liek me?

Mudkip itself looks a lot more like a mudpuppy (family Proteidae), a four-legged salamander with frilly gills. Not only are they as cute as puppies, but they were once thought to make puppy-like sounds. Like axolotls, mudpuppies never lose their baby gills and are entirely aquatic. They live in the shallow waters of anywhere from Canada to the southern United States.

So...if u liek Mudkipz, go ahead and find a real one. You have quite a few options. 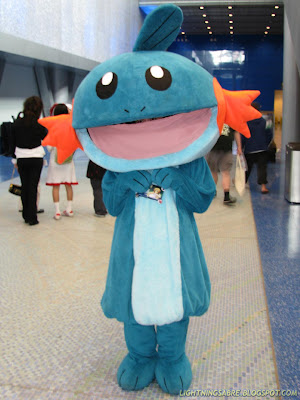 Including this.
Posted by KuroKarasu at 10:42 PM