(Warning: This entry is NOT for the faint of heart PERIOD. If you are squeamish, BACK OFF RIGHT NOW. Some of the pics I saw for this one made ME a little sick and I like to think that I have a strong stomach. Nature is not always pretty.)

So it's a zombie apocalypse. People are dying and un-dying left and right. You've got at least one gun and have barricaded yourself in the nearest Wal-Mart, although given the types of people who shop there, you wonder if maybe you were not better off with the zombies.

Then you remember that, wait a sec, there are a million things designed to feed off of dead tissue. Maggots come to mind (as vomit might to your throat). Whether they can feed off of undead tissue or not is another matter entirely. Regardless, there is another type of maggot that feeds on living tissue, so if you happen to be in Mexico-Central America when the apocalypse hits, you're safe either way. (There is another, almost entirely unrelated version of this one in other tropical parts of the world, so you're probably cool there, too.)

Wait. Wait. I just said that there was a maggot that fed off of living tissue. How the hell is that safe and where's a can of bug spray?!

The New World screw-worm fly (Cochliomyia hominivorax - nice species name!) lays its eggs in a mammal's bleeding wound. Yes, it could lay eggs in yours - like I said in the Toxoplasma entry, humans are just another mammal to nature. Try to kill the babies and the little worms will screw themselves deeper into one's flesh (hence the name - but the scientific name is so cool). (For those of you who do not understand Latin, the word "homo, hominis" means human and "vorax" is a cooler way of saying "eater.")

(I actually could not find a good video with these guys; they seem to have all been removed for obvious reasons.)

A brief reminder of why flies lay their eggs on dead animals: The maggots are born on their food so that they can start eating immediately. That means that whatever the screw-worms are laid on is going to find itself with a much bigger wound than before.

Like most small animals and insects, screw-worm flies breed often and have a lot of offspring in one sitting. The larvae pupate after anywhere from 3-7 days after hatching. After another week or so, the adult flies are ready to mate - and how! Females are promiscuous, mating with as many males as possible while they can. Each clutch contains up to 400 eggs, which can hatch into flesh-eating larvae in 12 hours. Their whole life cycle lasts 31 days max, during which the female can lay at least 2,800 eggs. 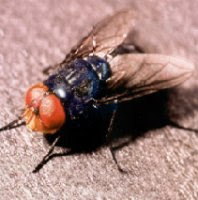 To be fair, adult New World screw-worm flies are HUGE and easily distinguishable from other flies. Oh, wait, that's still not fair.

Opening up a wound naturally leads to infection and even more screw-worms. Creatures infected by screw-worms usually die within a week or two due to infection, severe tissue damage, or any other combination of icky factors. (Zombies usually have infected wounds already, so they're prime targets for future punishment from these little nibblers.)

While you may be thinking, "Eww, I hope this doesn't happen while I'm eating a taco," the main concern with these guys is the damage that they do to livestock. Yeah, you're on the list, too, but the primary reasons behind the screw-worm's notoriety are economic. (To give you an idea of how drastic a blow this could be, a screw-worm infestation could easily cost cattle farms in Australia 500 million (Australian?) dollars in losses.) You are awfully close to a cow and people are more worried about the cow, a creature that oh, by the way, is responsible for global warming and removal of precious rain forest. I like cows just as much as the next person, but really? This might be a warning sign. 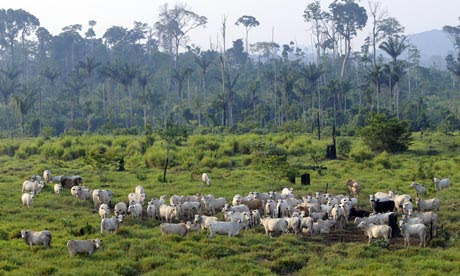 This is from Brazil, but makes the point pretty well.

Some of you will probably be relieved to hear that the screw-worm has been officially eradicated in the U.S. and several South American countries. Beware; everything in an ecological system has a niche. Who knows? Perhaps screw-worms are nature's answer to the impending zombie apocalypse. (Or maybe she's just trying to say, "Get the fuck out of the tropics, ranchers!")

Nah, screw-worms were totally made to be zombie deterrent. Or Wal-Mart shopper deterrent, take your pick.
Posted by KuroKarasu at 9:57 PM