The hydra is probably Greece's most notorious drakon. She (yes, she; nearly every Greek monster was female) fit the niche of 'impossible-to-kill dragon' very well. Her blood and footsteps were highly toxic. She could regenerate every head except the one immortal head in the center (which is why hydras based off of Greek lore always have an odd number of heads; I have heard anywhere from 3-9 as a starting point). That's right, zombie logic completely fails against this thing. Even Herakles/Hercules struggled with this one. 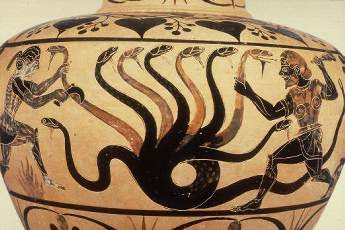 She is also probably the most botched of any Greek monster; as the name would indicate, a hydra is a waterborne creature. The Greek hydra never breathed fire. Ever.

Is it really THAT much of a bitch to CGI acid instead? Seeing shit corrode can be just as awesome...

She did, however, loan her name to a tiny little cnidarian like so many other badass mythological monsters: 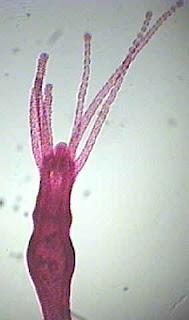 Real hydras are tiny, water-dwelling creatures in the genus Hydra. Hydras can be found in unpolluted, freshwater bodies of water in most temperate and tropical regions.

They are visible to the naked eye and resemble small, not-as-colorful anemones. They spend their entire lives in the sessile polyp stage -that is, they always look like little anemones and spend most of their lives in one spot. Basal disc, tube, tentacles. Simple as that. (Well, OK, do you REALLY want me to get into cellular differentiation specifics, here?)

Like the mythological hydra, these creatures have insane regenerative capabilities. They are just like planaria in that, if cut with a surgical knife or other sharp instrument, the two halves will form two fully functional individual hydras. In less-severe cases, the tissue regenerates whatever is needed. Apt name was apt.

Hydras are also poisonous, albeit not to the degree of their mythological counterpart. Most cnidarians, including corals and jellyfish, have cnidocytes - hooked, venomous cells that paralyze whatever they are about to eat- in their tentacles. Hydras are harmless to humans; jellyfish are another story.

Some types of algae take advantage of the hydra's predatory nature and have formed symbiotic relationships; the hydra gets rid of stuff that would nibble them and the algae provide some supplementary energy. Not sure if this is algae...but it is pretty.

Hydras never seem to age. Like the immortal jellyfish (another cnidarian), they are considered biologically immortal. All cells continually divide, making them hard to poison as well. If the situation with immortal jellyfish is any indicator, hydras may become capable of world domination.

This is how hydras reproduce. Perfect monster fodder.

They also have some interesting reproductive habits, but compared to ThursSaturday's animal, reproducing asexually and using sex as a last resort is hardly weird.
Posted by KuroKarasu at 8:46 PM