Heracross is one of the baddest bugs in the Pokemon world. It has massive ATK, the most powerful Bug-type attack in the game at its (STAB'd!) disposal and an ability that makes its ATK even more impressive. Its unique Bug/Fighting combination leaves it with few weaknesses. I have heard Heracross touted as one of the best Pokemon in the game since its introduction.

To make things even cooler, Heracross is based off of an actual beetle:

The rhinoceros beetle dubbed kabutomushi ("helmet bug") (Trypoxylus dichotomus or Allomyrina dichotoma, depending on who you ask) in Japan is the real-life basis for Heracross. They are found throughout Japan, China, Taiwan and Korea.

Like Heracross, the males of the species have spectacular horns with a cross-like growth on the end. They have been featured in every series that features monsters kicking each other's asses.

Including Mushiking, a game devoted entirely to fighting beetles. (Sorry, I couldn't find the rhino card.)

Also, like Heracross, these bugs are born to fight. In Japan, pitting one male unicorn beetle against another is as popular as fighting roosters and bettas, if not more so. This sport is enjoyed by children and adults alike, leading Japanese scientists to seek stronger, faster-growing beetles. People both lose and win a lot of money pitting one male beetle against another, but they are not difficult to procure at all; people either catch their own beetles or buy them at department stores for approximately 5-10 USD. 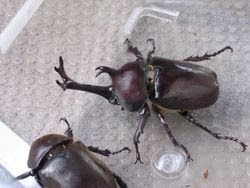 Boxed and ready for battle!

Want a real Heracross? Nintendo lies; it's not THAT hard to get one.
Posted by KuroKarasu at 10:31 PM

Email ThisBlogThis!Share to TwitterShare to FacebookShare to Pinterest
Labels: beetles, insects, scarabaeidae, Who's That Pokemon?