"They Actually Eat That:" Dog.

The video speaks for itself, really. I do, however, have to add that that is an INTENSE test of courage; after all, it takes balls to kill a friend.

If the video above did not tip you off, yes, the rumors about Vietnam and Korea are true: They actually eat dogs. 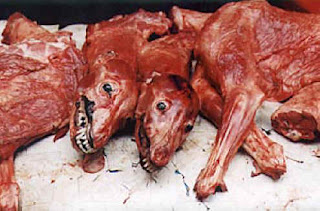 One WONDERS how hellhound stories got started...

I hate to sound like a bitch (hah), but can you blame them? Dogs are almost everywhere. Somebody, somewhere, had to have eaten them at some point. It just took a creative soul to turn dog meat into culinary art.

Eating Fido is a LOT more common than you think it is. Seriously, the better question is why not eat dogs? The ancient Romans, French and Mexicans ate (and in Mexico, possibly STILL eat) dogs; China, Vietnam and Korea are notorious for canine cuisine. If we want to get really nasty, weak dogs have been fed to their own pack on several occasions. This is nothing new; pretty much as long as people have had dogs, people have eaten them. Whether they have kept up the tradition or not is another story.

So why does the tradition persist in Asian culture? It depends on where you go. The Chinese cite their old medicinal practices; many of them relate to retaining body heat. In Korea, they have been eating dog meat since the Neolithic and show no signs of stopping- if anything, some of them want canine cuisine to become more and more mainstream. It has a really nice taste, apparently.

Even in these countries, eating dog is not without controversy. "Dogs are friends, not food" gained ground with animal rights movements. Korea still asserts that at least some dogs are livestock, even though no legal yes or no has ever been given.

Korea in particular has had issues with whether dogs are food or not. There are always new lines being drawn regarding dog's status on Korean livestock and food lists. Nonetheless, many dog owners feel no inner conflict about eating dog meat.

The question is, how far do you go with something like this? One of the investigations in China only took hold because of how the dogs were treated - if cows were being skinned alive, a similar objection could have been reached. HOWEVER, people like PETA would like to cease human-animal interaction entirely. What's the stopping point? After all, chickens and cattle make fine pets, too. (Remind me to do a post on mini-cows...)

Then again, I'm all for consumption as a means of trimming away excess mammal populations. Hint, hint.
Posted by KuroKarasu at 9:51 PM