Ever notice how it's mostly anacondas and other large constrictors that get the bad horror movies? There is a snake in the Amazon that is so much more worthy of a good horror flick that it...well, OK, it IS funny that Hollywood has not gotten its mitts on this one, yet.

To review (or, if you have never seen my anaconda entry, go see it now), anacondas are boas from the genus Eunectes. They live almost entirely in the water. The positioning and shape of their eyes (they have 8-shaped pupils! HOW COOL!) makes them look like aquatic puppy dogs. The green anaconda is the heaviest snake in the world and constantly vies with the reticulated python for the title of 'longest.' Its name shows none of that badassitude.

You know what the name Eunectes means? "Good swimmer." Way to make ANYTHING sound menacing, Greek.

There is a far more imposing snake called the bushmaster (Lachesis muta). Like most vipers, these snakes are deadly even as babies. At a maximum length of 12 feet, the bushmaster is the longest pit viper in the world.

Unfortunately, the best pic I could find showing its length was tiny.

Wait, what's a pit viper? Was "viper" not intimidating enough?

Pit vipers refer to snakes such as rattlers, lanceheads, bushmasters - anything in the subfamily Crotalinae. They live in Asia and the Americas. If you have ever encountered a rattlesnake, you have met your first pit viper.

Pit vipers are so named for the heat-sensing pits between their eyes and nostrils. In short, they detect infrared radiation. Although boas and pythons also have labial pits, the pits on pit vipers are a lot more sophisticated - pit vipers can strike accurately at an item 0.2 degrees C higher than the background temperature. Nobody is quite sure how this accurate heat sense looks to a snake, but it is a mighty fine sense indeed.

In case you do not get the implications of heat pits, allow me to clarify:

You can make your footsteps as quiet as those of a mouse. You can wear camouflage garb. You can wash away a lot of your scent. You cannot conceal your body heat. Mammals are homeotherms - their body temperatures stay relatively constant. If a pit viper wants to kill you, it will kill you.

A GOOD movie monster in action.

"What's in a name?" Shakespeare asked. "Bushmaster" sounds more intimidating than the infamous boid mentioned earlier, but there is even more horror laced into its scientific name. If the generic name "Lachesis" sounded familiar to you, but you could not quite place where you had heard it, perhaps this will refresh your memory:

Lachesis was the Fate that determined the length of one's life in Greek mythology. Add on the 'muta' part of the name and you have, literally, a silent killer. Even science admits that this snake can fuck you up (and not in the good way).When science says that something is deadly, it's deadly. 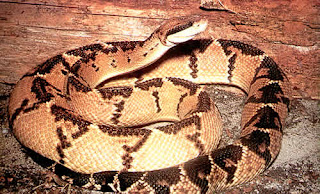 Catch on, Hollywood. This thing has tales of dread (and sometimes seduction) in areas to which it is native. You cannot beat that.
Posted by KuroKarasu at 2:21 PM