Who Let The Dogs Out?: Wolfdogs.

So, maybe after pugs, you're thinking that we humans have gone too far. Hell, it feels like society has forgotten that dogs are, in fact, carnivores. Maybe we should take a step back and introduce some wolf into the dog. 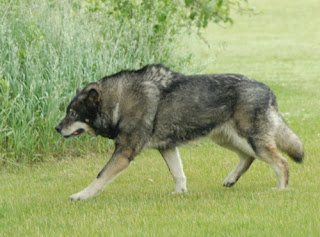 When a dog happen to meet at the right time of month, they make a wolfdog. There is no "one size fits all" description for a wolfdog - every one of them will be different. It's just like with mixed breed dogs. In fact, wolf dogs are almost the exact same thing as mixed-breed dogs, with all the unpredictability and hybrid vigor therein.

First off, a reminder: The scientific definition of "species" is based on "can this thing get it on with this thing?" It has absolutely nothing to do with the human perceptions concerning dogs and wolves. To science, if something can mate and produce 100% fertile offspring with something else, those two things are the same species. There may be behavioral difference between wolves and dogs, but that doesn't stop them from doing it like they do on the Discovery Channel...successfully.

As the silver fox study shows, most of the traits that we treasure so much in domestic dogs come from breeding just for docility. That includes floppy ears, wagging tails, and general obedience. The wolf is not bred at all - rather, it undoes a few stitches of whatever breeding went into the dog. Even with all the variability wolfdogs have, the tendency is toward timidity, not aggression. That does not mean you should keep one without doing your homework.

Let's look at some testimonials from people with wolfdog experience:

"I have a friend that has three. Not judging, just fact.

He got a puppy last year to go with his two older dolves..

His puppy chewed up his cabinets. Like, not a little bit that you could cover up with some trim. THE SIDES.

His puppy RIPPED UP HIS HARDWOOD FLOORING in his kitchen, which was her area while he was at work or whatever. He lets his dogs out at regular intervals, and other than his preoccupation with wolf/dog hybrids, he's a great pet owner.

His puppy has not one but TWO genetic defects, too (something about intestinal adhesions and her kidneys aren't in the right spots)."


"high (wolf) contents are often very difficult to handle and actually tend to fare BETTER as mostly outside dogs. they need a lot more everything all around. get a real high content hybrid and its an average 14 or 15 year commitment riddled with high insurance, expensive fencing, oftentime an animal who HAS to be fed raw, little to no travel(traveling with a wolfdog is practically impossible), the threat of your dogs being seized, and a lot of concerns that go above and beyond just owning a dog."


And finally, someone found this helpful little sheet on determining whether a wolfdog is right for you or not. This was honestly the least biased thing I could find about wolfdogs. I'm not necessarily advocating wolfdogs, but the behavior there seemed chillingly different to anything I have ever found when asking about reptiles. Call it a vibe; I could tell some people there just hated wolfdogs. I don't, but you should know what you're getting into. 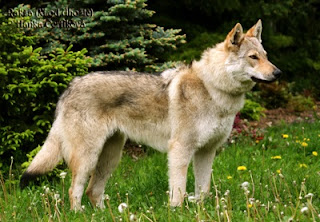 Although some breeds, such as the Czech Wolfdog, deliberately have wolf infused into them, bad things happen when wild wolves cross with stray dogs. The resulting hybrids might have no fear of humans - y'know, one of the things that had to be bred out of the domestic dog. You have domestic dogs to thank for pure black wolves, by the way.

For those of you curious, Balto, the most popular wolfdog ever, might not have been a wolfdog. He was most likely a purebred Siberian Huskie. Rumor has it, however, that Iditarod racers are contemplating breeding wolf into their stock to give their dogs more endurance, speed, etc. That's what wolves are slowly becoming: Dogs on steroids.
Posted by KuroKarasu at 11:43 PM

Email ThisBlogThis!Share to TwitterShare to FacebookShare to Pinterest
Labels: canids, carnivores, hybrids, mammalia, mammals, Who Let The Dogs Out?