Bio-Art: The Life of Pi.

It's always hard to pin books down as bio-art. It is even harder to pin them down if they are considered "fantasy." Nonetheless, there are several reasons that Life of Pi by Yann Martel is enjoying this column alongside Jurassic Park and Fragment. Whoever said literature could be excluded from the definition of bio-art? Science fiction usually pre-dates science fact. Truth can indeed be stranger than fiction. If Life of Pi is fantasy, it's hard fantasy- fantasy so close to something that could actually happen that comparing it to regular fantasy is like comparing wine to grape juice. In any case, Life of Pi deserves a mention on this blog, if not this column. 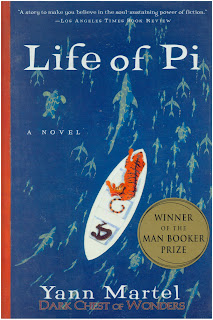 As the title would imply, the book's primary narrator is a young man who goes by Pi - as in, the irrational number. (The book goes into detail as to why he picked that name for himself.) Through a series of mishaps, Pi winds up with an unlikely bunch of friends: a zebra, a hyena, an orangtuan, and, most prominently, a male Bengal tiger named Richard Parker. The zebra, orangutan, and eventually hyena all get eaten (with the hyena doing most of the damage).

So, how does Life of Pi make my bio-art column? It's not that the author takes detailed scientific notes on sloths - rather, reading it reminded me a lot of Inside of A Dog. Beneath the tale of a boy trapped on a boat with a tiger is a truckload of animal psychology and, as the critics put it, "a passionate defense of zoos." Honorable mention goes to the island of meerkats and carnivorous algae.

One of the first things the book goes into is animal training. While one could debate whether or not all animals are indeed social animals (and it is a big debate) the author is completely right that omegas of any given animal group are the most malleable. They are also right that a trainer must put him/herself into the animal's world, startling it with loud noises and showing confident, dominant behaviors. Animals can literally smell fear and weakness. Pi used this advice admirably when faced with a tiger as his only companion. Psychology saved him from becoming tiger chow. (I am not sure if the movie gets into detail about these aspects of the book.) 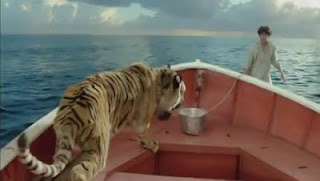 The defense of zoos is outstanding as well. The author cites, for example, numerous instances of zoo animals escaping, then returning to their cages. He compares zoos to 5-star hotels for animals. Zoo animals do indeed have consistent food and water; anyone who has ever owned any pet will tell you that they know what time dinner is. It is easy to tell when an animal is not pleased with its habitat. Again, umwelt in action.

Fiction though it may be, Life of Pi was a very well-researched work.  It is so well-researched that an event towards the end makes one question whether the story was true or false. When Pi is asked to tell somebody his story without including animals, his tale changes to one of cannibalism and mental scarring. The people listening to that story instantly say that they prefer the one with animals - as if humans doing those things would be too gruesome to comprehend. Read it, and make up your mind for yourself.

P.S. - I will make another entry on Primeval: A New World once I have finished with it.
Posted by KuroKarasu at 11:11 PM