...wow, that title sounds dirty. If you're too young to have a mind that goes to the gutter, don't worry about what I just said. Just know that almost everything in nature has an amazing sense of navigation compared to the silly humans who use Google Maps.  Like the sailors of old, they often use the stars as a sort of natural map. It turns out that this holds true for dung beetles as well.

Many animals, including birds and humans, use stars for navigation. This is  not the case for some creatures, like pigeons, who use the Earth's magnetic pull. Given that a little insect probably doesn't have great eyesight like birds and humans, it is mind-boggling to see one use the galaxy as a road map. 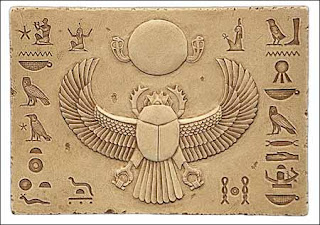 If Discovery News is correct, dung beetles don't just use the starry sky, but the Milky Way for navigating as they roll their dung balls. Even on a moonless night, a dung beetle will roll its ball of feces in a perfectly straight line. It was a mystery how they could do this without moonlight.

The experiment to test this went along these lines:

"To test their navigation, researchers watched the beetles in a planetarium under a starry sky, a sky showing only the Milky Way, and an overcast sky. The beetles had no problem maintaining their straight lines under the first two skies, but couldn’t do it when the Milky Way was indistinguishable.

Most stars are probably too dim for the insects’ eyes, the researchers said in the study published online in Current Biology."

Hm. So along with making pyramids, the ancient Egyptians figured out that dung beetles rolled their balls of feces according to the heavens. Maybe they were onto something about scarabs being sacred. I wouldn't sacrifice an animal to that, though.
Posted by KuroKarasu at 3:14 PM