Blah, porcupines. No matter how neat porcupines and horned gophers are, this blog needs more badassery. Enough about rodents. Let's just dive right into today's dose of badass, shall we? 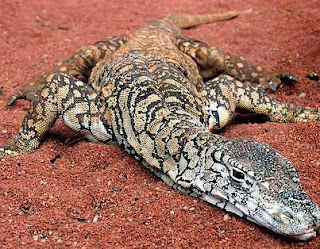 Crikey! This fine Sheila is called a perentie (Varanus giganteus), and she's native to Australia. Perenties, being monitor lizards, are carnivorous and have astounding forked tongues. Like many monitors, they also have amazing skin patterning.

Crocodile Hunter jokes aside, perenties are the largest lizards in Australia. They can get over 2.5 meters (8 feet) from head to tail. Larger adults can even take down kangaroos, which, it merits reminding, can kick most predators to death and drown others. Perenties will eat virtually any kind of meat, however...including each other.

Some of you are probably wondering why monitors are called "monitors," anyways. The answer lies in one particular behavior that many monitors, including the perentie, exhibit: they can "tripod," i.e. stand on their hind legs using their heavy tails like an extra foot. They do this to "monitor" their surroundings - just like we use a monitor to see what our computers are up to.

Despite their size, perenties would rather run than fight. They are notoriously shy. Perentie claws are meant to dig burrows in a flash. They can also climb trees very well. Excellent camouflage means that, all things considered, they are even hard to see while standing still. Guess that hardcore ecology down under has taught them a thing or two over the eons.

As with other types of monitors, yes, some people keep perenties as pets. They go for roughly 2,000 USD and you definitely need a license to keep one. There is still debate over whether perenties are venomous or not, but given the damage those teeth might do regardless, best leave handling them to people experienced with reptiles. Get a plushie instead.
Posted by KuroKarasu at 9:10 PM