For whatever reason, cops have been killing a lot of puppies, lately. There have been way too many instances of cops shooting family dogs, so yes, the government does kill puppies. This one happened right near where I live...and features a breed that I had not even heard about until this incident: The Rhodesian Ridgeback. 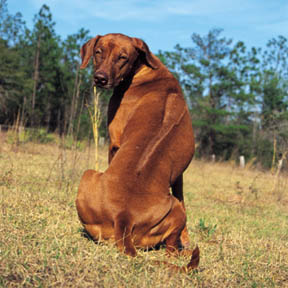 Rhodesian Ridgebacks are one of those "what else would you call it?" dogs. From Rhodesia in Zimbabwe, these strange dogs have been around since the 16th and 17th centuries (when the Cape Colony was being settled). The official standard dates back to 1922.  They are intelligent, mischievous, active dogs that require stimulation, but can be great pets so long as they are handled well.

Rhodesian Ridgebacks get their name for one very obvious trait: a ridge of hair on their spines that grows in the opposite direction from the rest of the hairs on its body. The original Ridgeback from Zimbabwe, as well as the Thai Ridgeback (one of the oldest dog breeds), also have this strange development. It looks like mostly an aesthetic thing that helps cement the breed as opposed to something useful.

Rhodesian Ridgebacks are all-around awesome dogs. They're hunters, retrievers, and great family pets. They're actually called "lion dogs" because they can hunt lions once unleashed in a pack. That said, this dog needs a lot of exercise, and has endurance that would make a marathon runner keel over. They do have issues with hip dyplasia and cancer, so even being a badass otherwise doesn't make them problem-free.

Another downside: Ridgebacks can play a little rough. If you don't assert your dominance, then they can get destructive. Is that any reason to shoot one? No. There is no way for this dog to be confused for a coyote or whatever. Some officer just up and shot a family pet. This is not cool....but on the bright side, it inspired a blog entry. My condolences; that sounded like a great dog.