A rather interesting question came to me in the form of a fortune cookie: Which would you rather have as a pet: a pig or a monkey? Both are notably intelligent, messy, and carry diseases that can cross over into humans. It's a fair question; answer it below if you like.

Now, as anyone who follows this blog is aware, I am not the biggest fan of monkeys. My answer to that question would probably be the pig, hands-down, if one particular type of monkey did not exist: 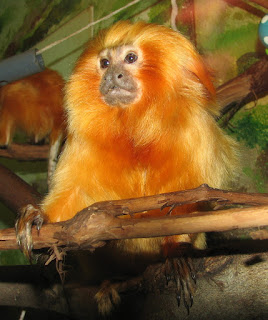 It's called a golden lion tamarin (Leontopithecus rosalia) (or "golden marmoset" for those of you without any imagination). It can be found in the Brazilian forests along the east coast. This monkey has a diverse diet of fruit, leaves, insects and eggs. Basics done - you may d'aww now.

The golden lion tamarin really looks like a little lion. Although not predatory like a lion, this monkey does have a "mane" of elongated hair along the sides of its face. This color supposedly comes from the carotenoids in their diet, much like flamingo coloration being the result of eating crustaceans. The tamarin also has claws - a rarity in primates, with the notable exception of all other New World monkeys. 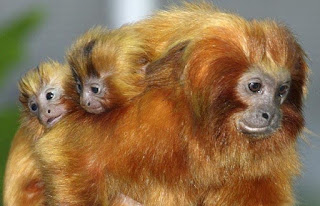 Golden lion tamarins are also monogamous. Like wolves, they have a social structure in which the top male and top female mate. They mate for life while everybody else doesn't get any. Aww, just in time for- wait, it's not Valentine's Day, yet. Never mind.

Alas, the golden lion tamarin is highly endangered, and not because it's darn adorable. A good chunk of its habitat has been chipped away by deforestation. The lion tamarin is considered one of the more popular endangered species - enough so that one of the characters in Tokyo Mew Mew has a tamarin as her animal splice. That said, any attempts to get one as a pet would probably be illegal. Guess I'd pick the pig after all.
Posted by KuroKarasu at 11:22 PM