Insects are automatically nightmare fuel when it comes to creature design. With the possible exception of butterflies, there is no insect on the planet that cannot be made into an object of terror. Even harmless, annoying things can be magnified into monsters. Weevils, which are already terrifying if seen up close, reach the peak of their horror monster potential in this fellow: 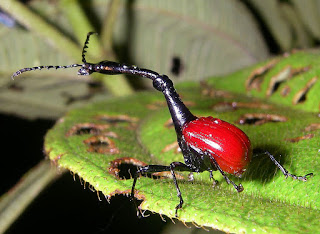 This bug-meets-Apatosaurus creature is called a giraffe weevil (Trachelophorus giraffa) . It is native only to Madagascar, second only to Australia for the title of "World's Weirdest Island." They are herbivorous like all weevils, partial to seeds and fruit. New Zealand also has a "giraffe weevil," so just to be clear, this one is from the island with happy lemurs.

The giraffe weevil cannot help but stand out. That long neck on the males is 2-3 times the length of the females. It is almost an inch log - not the record for weevils, but still quite big for one. It has a striking, red and black palette. No, it is not poisonous as far as my sources know. Seeing a giraffe weevil in the wild must be amazing. The bright  color and long neck both make it unforgettable.

This long neck is for one very important purpose: Mating. Specifically, male giraffe weevils fight each other with their long necks. The females have much shorter necks, and referee the neck-fights between the two males. The winner gets laid. Fair enough.

This is not to say that the ladies of the species are not at all interesting. Unusually for insects, the female lays exactly one egg after mating. She then encases it in a tube cut from a leaf. The leaf is then cut such that two edges mesh together-  effectively, primitive Velcro. The leaf nest then drops to the forest floor, where the weevil will hatch, grow, and repeat the process.  Giraffe weevils: males look freaky, females invented Velcro before people.
Posted by KuroKarasu at 11:50 PM