Looking at the design of one of the latest Pokemon, Chespin, made me notice something: it is really, really hard to make rodents anywhere near badass. Even giant rodents like capybaras are seen as buck-toothed meat. Adding horns and fire to a fuzzy mouse wouldn't make it any more - 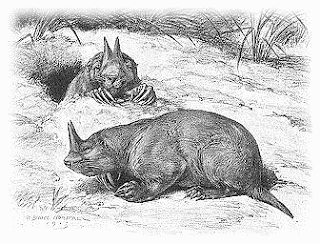 Horned gophers (Ceratogaulus) were once very real, very alive creatures.  There are four species known in the genus, all of which had nasal horns like small, fuzzy rhinos. They lived in burrows, much like modern gophers. Presumably, they were also herbivorous. They lived in what is now the modern U.S. Great Plains, particularly Nebraska, in the Miocene and Pleistocene eras. Everything cool there is dead.

Horned gophers had many things in common with modern rodents and moles, which are not rodents (so please hold your Gurren Lagann jokes). They had flat paws with sharp claws that were perfect for digging, and thus likely spent much of their time in burrows. These gophers were just shy of a foot long, so even if they had facial horns, they were far from terrifying. This makes horned gophers the smallest horned mammals to date. A shame they're all extinct. 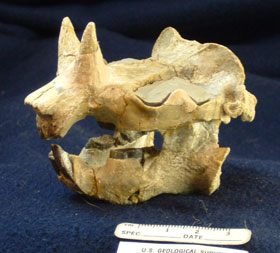 To this day, nobody really knows what those horns were for. They're the wrong shape for digging. Moderns rodents similar to these gophers have terrible vision, so a mating display is virtually out of the question. The best guess, judging by the horns' positioning, is that the horns were used as a defense against predators. They even evolved further towards that end as the species progressed.  This rodent had teeth and horns for any preds to deal with. Not bad for a rodent!

The horned gopher's unique look has not gone unnoticed by the media. Although you will never see these guys in Jurassic Park, games like Tiny Zoo offer them as extinct oddities. They are fairly popular as far as small, extinct mammals go. I kinda wish the new Primeval would have one as a mascot character.