A while back, I did an entry on GloFish. These little glowing zebrafish have been in Petco for quite a while now, looking unnaturally beautiful in a section already loaded with alien-looking animals. As I spend a decent amount of time there, I began to notice new GloFish. They were, and presumably are, very popular. Why wouldn't they be?

For those of you completely unfamiliar with GloFish, GloFish (TM) are fish spliced with the fluorescent gene from various cnidarians- jellyfish, sea anemones, etc. This gene glows under blacklight - not really "glow in the dark," per se, but close enough. They were originally developed to track certain genes in zebrafish throughout the fish's life cycle. They have caught on in pet stores as well. 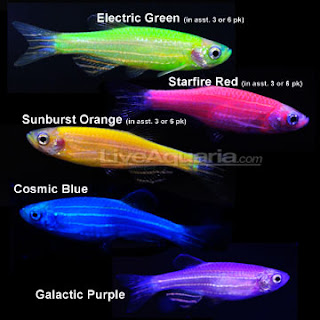 Originally, GloFish only came in three colors: reddish pink, neon orange, and electric green. Since then, GloFish have added ("cosmic") blue and ("galactic") purple to their crayon box. These aren't as impressive as the hotter side of the spectrum, but still quite cool. I look forward to seeing what they do next.

Much to my relief, GloFish has also added tetras to its glowing aquarium.  I have heard some debate over exactly what kind of tetras these are; I've heard "white skirt" (Gymnocorymbus ternetzi) and am going with this. Like danios, these are freshwater fish, so don't worry too much about salinity. Angelfish are supposedly next, but glowing koi would be amazing (and raccoon food). Currently, the tetras only come in Electric Green.

Recently, there has also been some concern about releasing GloFish into a natural environment.  (I will not get into "domesticated" VS "wild" here- it's all very hazy and subjective.) They could be harmful if released, just like any other invasive species. Several countries have banned GloFish for the simple reason that they are genetically engineered. Personally? A bright red danio would probably not stand a chance in the wild. Still your call on whether to take them into your house or not.
Posted by KuroKarasu at 11:56 PM