Sometimes, domesticated animals become so normalized that we forget they're effectively freaks. Dogs are a good example; they can deliver quite a nasty bite and are noisy at night. This is not the case with lab rats. Despite Ratatouille's best intentions, there are still more people who freak out around rats than around dogs. 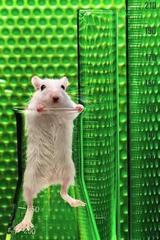 Before you go "aren't rats exotic?", no, these laboratory rats are most definitely domesticated. They are calmer, have smaller organs, and produce more offspring than their wild counterparts. Despite being able to breed with wild rats, these rats are derived from Victorian fancy rats. Fancy rats have been domesticated since he Victorian era, and even if they hadn't been, someone would have eventually made pet rats simply because of their intelligence and proximity to humans.

Onto albino lab rats - the typical white rats seen in science labs. Rats have been used as test subjects for centuries. The first test done on rats was in 1828. Soon, rats became the first animals deliberately bred for scientific research. They have since been used to test...almost anything that could possibly happen in a human body. Really.

Depending on what factor is being tested, a different white rat may be better than another. The different strains of albino rat are meant to be as genetically identical as rodent-ly possible.  That said, the whole genome of Rattus norvegicus has been very easy to sequence because of this extensive captive breeding. 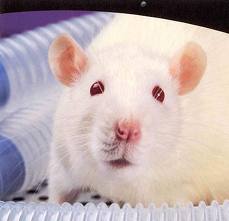 There are several strains of albino rat used in scientific research. The most common is the Wistar rat, which dates back as far as 1906. It was the original lab rat strain and is still commonly used today. The tail of a Wistar is always shorter than the body, and the head and ears are longer than average. This is the generic "test rat," although there are more genetically-stable, outbred strains that don't have a fancy name.

That said, there are other kinds of lab rats aside from the standard albino varieties. Some are bred to get diabetes. Others have tumors bred into them. A variety of "fuzzy" rat gets kidney failure after one year of life. There is even one strain of rat that is bred to be morbidly obese, just so that people can test diet products on them. The list goes on, and all of them merit an inclusion in Freak Weeks. All of them.
Posted by KuroKarasu at 11:59 PM