They Actually Eat That: Angus Beef.

Everybody these days is advertising Angus beef. People actually care about what they eat now; putting a breed name in front of beef implies a higher standard to the audience's unwitting minds. Does it really, though? If so, why does every fast food chain on the planet suddenly stock it?  Never fear, "They Actually Eat That" is here to put your thoughts to rest! 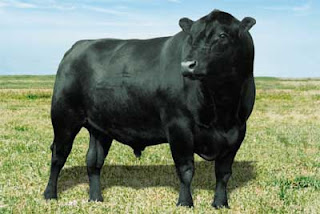 First of all, what is Angus beef? Angus beef is any meat that comes from Angus cattle, polled (hornless) Scottish cattle. They have been in the U.S. since 1873 at least, when a farmer named George Grant began breeding the British cattle in Kansas. They were bred for and marketed as the ideal beef cow. They rarely let people down by that standard, if you know what kind of Angus meat to get.

Here's the kicker: A cow must be at least 51% black to be considered an Angus. That's it when it comes to labeling something as "Angus." It doesn't even have to technically be an Angus, just a dark cow. Angus are known for their black color, so there's a chance that there's some Angus in a mostly-black cow, but exactly what else is in there is up for debate. Government hoodwinking strikes again!

Real Angus beef is known for its marbling. For those of us who aren't professional chefs, this means that there are strings of fat on the muscle. Although this sounds gross, it helps keep the steak a tiny bit moist when cooking.  If you get meat from something like a Belgian blue, for example, there's no fat there - it just heats up instantly. It does matter where you get your steak from; it stops mattering so much when that meat is stuffed into a sausage lining or made into a patty. 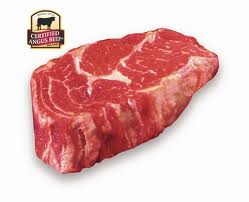 Angus cattle may be known for their meat, but does that mean all Angus meat is good? No! There is such a thing as low-quality Angus beef. All it means is that the meat comes from standard beef cows instead of cows that we don't know the lineage of. In other words, Angus is a buzzword. They're just finally telling consumers that their beef comes from this type of cow as opposed to discarded Holsteins. The Angus burgers and hot dogs floating around could well be made from the discarded bits that weren't prime steak.

Those of you wanting good Angus beef should look for two things: certification and grade.  Certified Angus is exactly what it says: beef that comes from cows that are most definitely Angus cattle. Grade applies to all beef - even Angus. The Angus used in fast food burgers is either the not-Angus beef or Angus beef barely fit for human consumption. Be a smart consumer. It scares the machine.