Has anyone ever wondered why aliens are in everything these days? Only conspiracy theorists, most likely. Has anyone ever wondered why the great majority of them look like little more than humans with makeup? There's the intelligence factor, but the real reason is most likely laziness. If you really want to get creative with aliens, you're going to have to go all the way back to the Cambrian. 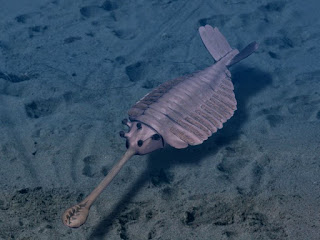 Like this thing. Wow, is that even from Earth?

Opabinia above was from an earth waaayyy before the first chordates ever roamed the seas. We're talking the Cambrian (545-525 mya), the first period when life was noticeable in Earth's history. It was found in the Burgress Shale with things like Anomalocaris, so we can assume that these things were at least in British Columbia; a questionable specimen was also found in Australia. It was only about 3 innches long. We don't quite know what this thing ate, in part because of one very obvious trait.

Opabinia had a proboscis that looked and likely worked very much like a jagged elephant trunk. This means it probably ate shell-less, squishy little things from the sea bottom. The wormy schnoz was about a third of the length of this creature's body, and its digestive tract actually did a u-turn inside of its body. Quite twisted for one of the most primitive life forms.

Opabina also had strange limbs. Aside from the gill-covered blades, there are tiny little legs on the underside of the creature's body. They weren't jointed, so Opabinia was not quite an arthropod. The tiny legs may be precursors to arthropod legs, supporting the theory that Opabinia and its kin may be the first steps between annelids (earthworms) and arthropods. Trippy.

There has been some confusion as to Opabinia's family tree. Because of its odd "limbs," people have a hard time classing where exactly Opabinia belongs in the grand scheme of things. All sorts of things have been tossed around: arthropod, annelid-arthropod ancestor, and even the closest living relatives being water bears (tardigrades).

OPabinia is probably one of the best candidates for an alien design in the entire history of the planet. Ship or creature-get creative. Next time you design an alien race, guys, please be more creative than "generic LGM/human with makeup/reptoid." I've particularly wanted to see an alien with a different, completely inhuman jawline, more like a crow or dolphin. It's fine if you want to put aliens into everything, but think outside the box a little.
Posted by KuroKarasu at 11:27 PM