There was once a little horror story called Year of the Angry Rabbit. It was a flop for one very obvious reason: the monsters featured therein were giant rabbits. That is just about the least terrifying concept ever...even if you happen to see it in real life: 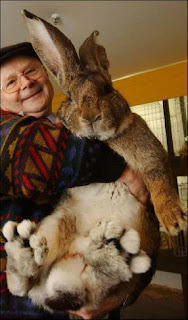 A while back, this photo was posted on Snopes. The New York Post article it was from accurately called Herman a German Giant rabbit. Could German scientists really be breeding giant rabbits, possibly to create the most cuddly-wuddly army ever? Yeah, no. The rabbit, however, is a very real giant bunny, bred mostly for fur. Lots and lots of fur.

There are several breeds of giant rabbit. The most famous, in part thanks to the internet, are the Flemish and German giants. They are common knowledge to rabbit breeders, and have been around since the 16th century at least. They can even occur as freak accidents in regular rabbit breeds.  Anyone who knows bunnies knows about these guys.

As with all giant versions of things, one must ask "how giant is giant?" For rabbits, "giant" is an 18-pound furball. A giant rabbit can get over a meter from twitchy nose to fluffy tail, all the while making onlookers d'aww. Beware: they also eat a lot more than the average bunny. No reports of killer giant rabbits yet, thankfully.

The current record book holder isn't even a giant breed. Humphrey is a French lop, but he's gotten over 3 feet (roughly a meter) long. The Continental Giant Amy is currently larger and heavier, but there is a good chance Humphrey will catch up. Giant bunnies are real, but whether they will become truly monstrous remains to be seen. That would take a lot more selective breeding, for sure.