Pinch, punch, last week of the month! You know what that means: It's a Theme Week! This month's theme is MEGAFAUNA. Let me say it in bigger letters:

Megafauna, in general, means "any animal larger than a human that has not been domesticated." The term can apply to both extant and extinct species. The term is usually reserved for giant, extinct animals that were much larger than their modern day counterparts. Giraffes, elephants, and many other famous African animals are also properly megafauna.  Believe it or not, the aurochs, the ancestor to the modern cow, was megafauna. We have bred cattle down a lot, and they're still pretty darn big.

That said, there will be a lot of extinct creatures this week, too. Megafauna tends to vary inversely with human population - that is, the more humans there are in an area, the less megafauna there will be. There are a number of reasons for this.The most obvious is that humans are a lot like wolves in that anything big against us falls to coordinated effort. Less obvious things include competition for resources and habitat destruction (which kinda falls under "resources," in retrospect). Basically, humans and megafauna do not mix well.

So, without further ado, onto the first member of the heavyweight class: 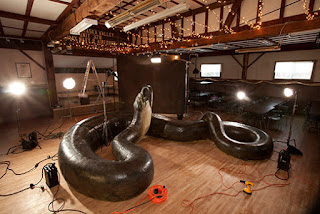 Surprise, surprise: this week is starting with a giant snake. For those of you who have not seen this monster, its name was Titanoboa and it died out long before humans walked the Earth (so your hands are clean). The only known species, Titanoboa cerrejonensis, was found in the coal mines of Columbia.

Titanoboa was a giant, even among modern giant snakes. It was 48 feet long and weighed over 2,500 pounds. To put things in perspective, the longest snake, the reticulated python, is at least 10 feet shy of that. It was about as wide as a garbage can, if not slightly bigger. As for how dangerous it was, I believe the following demotivator makes the point best: 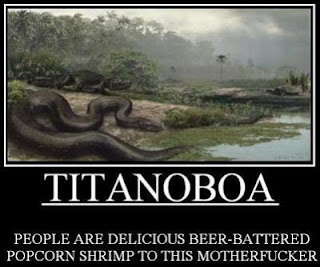 The discovery of a snake this big tells us a few very important things about its environment. For starters, there had to be prey big enough to accommodate such a large snake; large snakes need large food, after all. Huge reptiles also tend to live in tropical climates, meaning that Columbia was still hot millennia ago.

Before you ask, no, this snake did not eat dinosaurs. Titanoboa appeared in the Paleocene, around 60-58 million years ago. That is the time directly after the period when dinosaurs went extinct. If there were dinosaurs for it to eat, they would have been the stragglers from the KT event that refused to evolve into birds. The Paleocene had plenty of large mammals, birds, and reptiles for Titanoboa to feed on regardless.

Pop culture loves picking on giant snakes, and Titanoboa is no exception. The Smithsonian has a rather extensive page on Titanoboa, including what it would take to support one in a zoo. Primeval: New World also featured a Titanoboa, overlapping it with a Native American legend. Giant snakes are pretty common in folklore; who's to say that someone didn't discover Titanoboa before modern science?