Instead of my usual Creature Feature, today's entry will be a totally different kind of Creature Feature. Much like many bloggers who actually go out and go things, I will provide coverage of any nature-related events I happen to encounter. I'd like to do this seriously one day- it's an awesome idea -  but funds and such will not allow. So, for now, I am limited mostly to events that happen in Illinois.

That said, if you see an event hosted at or by Big Run Wolf Ranch, don't turn it down. They happened to be at my local forest preserve last night (the 24th). That place has a lot more than just wolves, so along with Shanoa, we to see some really wild stuff: 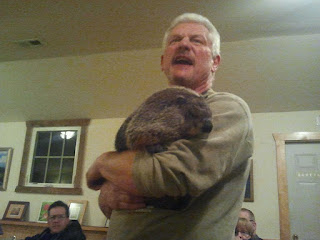 For those of you who have no idea what a groundhog is...there ya go. This is the groundhog we in IL use for our Groundhog Day predictions. 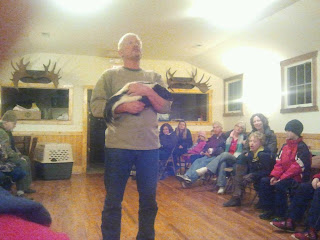 Skunks make amazingly great pets, even though many people would consider them wild. They also come in colors other than black and white. Kirby II here was a real doll, letting everyone pet and cuddle them. Kids even got to "babysit" him. 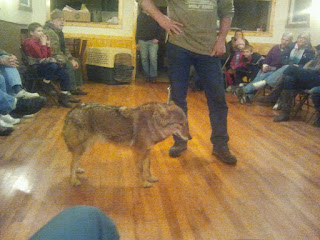 There was a coyote, too. He was skittish, as a real wild coyote would be. Coyotes will not eat humans, but will eat small pets like Chihuahuas. I like them already. Pecos, our coyote, was also used as an example of a desert animal, featuring large ears and small paws. Another good example: Fennecs. 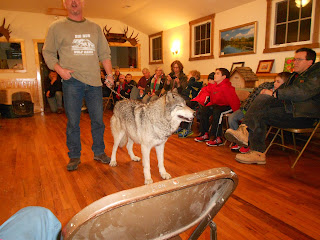 The wolf above, Shanoa, also appeared at Loyola the night we had a wolf showing. The big male, Zeus, was unwilling to come; when unwillingness is backed with a 1400-pound bite, even a wolf handler will listen. Tangent: The porcupine also could not make it.

Now, something that bugs me that did not get answered: it's hard to tell where this guy draws the line between "domesticated" and "tame." As I went into detail in my first essay on breeds, domestication is an iffy issue with no real scientific gauge to back it. I'm curious as to where this guy draws the line; his wolves and many other animals were bred in captivity and tamed.
Posted by KuroKarasu at 11:05 PM