Meet the human botfly, Dermatobia hominis. Like the much prettier quetzal, it is native to Central and South America. If its classification as a dipterid like the omnipresent housefly doesn't freak you out enough, wait until you see how it reproduces.

Botflies are pretty big for flies. When it comes to laying eggs inside of a living creature's flesh, being huge and conspicuous is a bad thing. Instead of evolving to be a little smaller, the botfly has devised an amazing, twisted way to get her offspring under your skin.

She wrestles a female mosquito so that, when the mosquito bites down on something, it also deposits her eggs for her. Were it not a fly and a mosquito we were talking about here, that would probably be hot.

When the larvae hatch, they burrow into the host's flesh. There they stay, like living zits, for about 6-8 weeks (I have heard various time-spans). At their rear ends are breathing tubes, which give the larvae oxygen. Their front ends are laced with black, hooklike spines that keep the little maggots quite firmly in their holes. When their time is up, they drop out harmlessly into the Earth, where they then metamorphose into adult flies. The cycle begins anew.

The botfly larva is...relatively harmless to its host. Bar the initial incision and burrowing, it does little damage. It's just a little freaky. The larva can only survive in an uninfected wound, so nature has done its best to make sure that the damage is as clean as possible. They might even make their own antibiotic. (I have heard of some infections after pawing around Google, but it's the internet, and most people would want to take these guys out even if they ended up curing cancer. Infections seem to result primarily from people attempting to pull the little maggot out, which results in a lose-lose situation.)

There are, however, a few cases in which a botfly has burrowed into someone's eye or brain. In that case, GET THE SUCKER OUT IMMEDIATELY. The botfly does not aim to kill its host; most parasites end up in such places accidentally. They are not regular brain- or eye-eaters. That does not mean they should be in your gargantuan head. 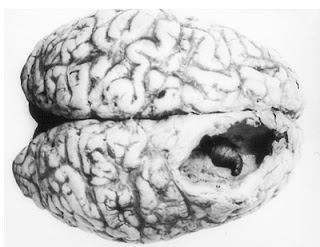 Nobody's made a horror flick based on this? For shame, Hollywood.
I may as well come out with it: I find botfly larvae just as adorable as planaria for no apparent reason. (That places them above human worm babies right there.) Maybe it's the snorkel; it just sounds so darn funny to hear about a maggot needing a breathing tube. Maybe it's their grubby pudginess after being in some animal's skin. Maybe it's because the only really unpleasant thing about them is that they burrow into your flesh for a few weeks, then drop out; even though botflies do hurt, they cause very little harm (unless they get into your brain or eye; then, by all means, remove them). Maybe it's because they can theoretically be stopped by placing a slab of meat or nail polish over them...which has got to be the most insane thing I have EVER heard of when it comes to stopping a parasite. 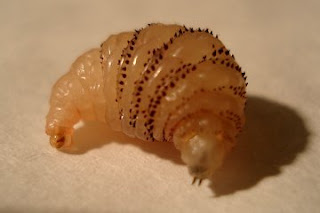 Aww, he's cute. And sticky-lookin'! Seriously, though, some botfly hosts name their little larvae. This one was named Theodore.
They could also be tasty, but I'm not about to try that. Even I have my limits.

(P.S.- I have laced far too many Invader Zim references into this entry for no apparent reason.)
Posted by KuroKarasu at 2:06 PM