Some of you are probably wondering why I have never done any deer on this blog. Their mating displays are at least as impressive as those of the pretty male birds I keep showcasing, right? Hell, the Irish Elk supposedly went extinct because of its huge, elaborate antlers!

THAT is a nice rack!

"Females are sad, males are AWESOME" is not restricted to birds. It is a lame, repetitive formula that one can easily get bored of, but common in nature that it is almost impossible to avoid. Many lizards, mammals, and insects also use this formula. Birds just so happen to be my forte, and, unlike deer, are spread across many genera.

In mammals, the difference between sexes tends to be greater than that in other classes. Not only are the females less elaborate, but, due to CRAZY mammalian sexual dimorphism, are usually smaller (even though they have to bear live young and provide them with nutrients...why?). I will have to look up exactly why the size difference exists sometime. All I know is that it bites worse for mammalian females than avian ones.

This deer is no exception to that rule...but, evidently, female deer have the same taste as female humans do in vampires.

(It burned my eyes just to Google this.)

The Indian muntjac (Muntiacus muntjak), also known as the barking deer, is native to pretty much all areas of South Asia. It is one of the oldest known species of deer, and among the first to evolve antlers. 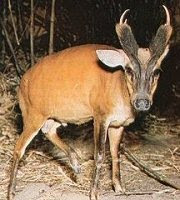 Child of Baphomet, or reminder of a time long past? You decide.

The male of the species has unusual headgear to show for this change. His are stacked on top of bony nubs, making him look...well...demonic. 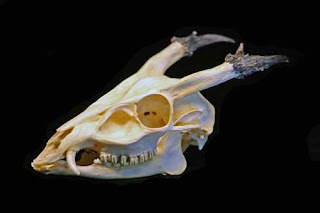 Of course, any mammal looks demonic when it is not covered in fur.

They also have fangs. Tusks my ass; they may not have venom, but they certainly do NOT look like the tusks of swine, elephants, or anything else besides other primitive deer. Those teeth are not just for show; male muntjacs fight with them. They are not used to suck blood, even if they really, really look the part. 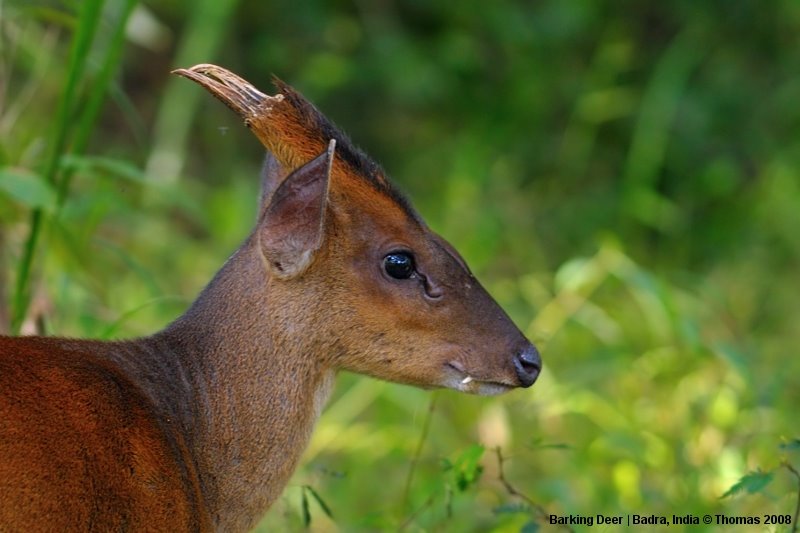 I vant to kick your ass!

That's not all. Muntjacs are also called "barking deer." Yes, in order to warn other deer, a muntjac barks. As in, "woof woof." Why choose between vampire and werewolf? This little deer can play both!

Screw Edward and Jacob. I'm on Team Muntjac.
Posted by KuroKarasu at 10:35 PM