"They Actually Eat That:" Balut.

Is there anything cuter than a baby duck? They're so fluffy and yellow regardless of what species of duck is in question, and they follow their mommies around in such an adorable fashion. 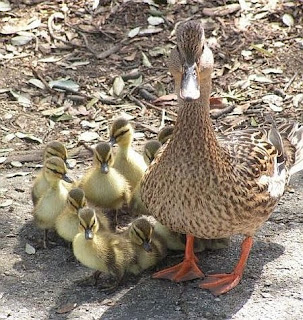 Wait. This is leading to something horrible, isn't it?

Balut is a dish commonly eaten in the Philippenes, Vietnam, Laos, and, in general, Southeast Asia. As you can see in the vid, the egg is left to mature until just the right point: When the little duckling or chick inside has down, a beak, and a face. The exact maturity varies with location, but is no less morbid.

(I mean no disrespect - this is another cultural divide. Again, Americans eat crap, too. Next week, the spotlight will be on AMERICA.)

They actually eat that?!

Oh yeah. It is quite common as a street food in the Philippenes, and eaten on a regular basis in the other places mentioned above. It started as an aphrodisiac, and remains popular as such. It's also supposedly quite tasty if you can look a duckling in the eye and eat it. 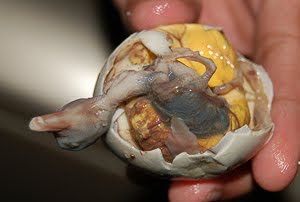 Eat it, Hieronymus Bosch.
Just a little refresher on eggs: The ones that you get from the grocery store have no little chickens inside of them. They're duds. Birds lay eggs just because they feel like it sometimes; the hens that make grocery store eggs were not kept with rooster. There was never going to be any baby chicken in there.

If you feel like going off of eggs for a bit after this entry, I will not blame you. If, however, you go to the Philippenes, do give balut a try. You will be hailed as a hero back home for stuffing a baby duck in your mouth.
Posted by KuroKarasu at 9:29 AM

Email ThisBlogThis!Share to TwitterShare to FacebookShare to Pinterest
Labels: asia, china, They Actually Eat That