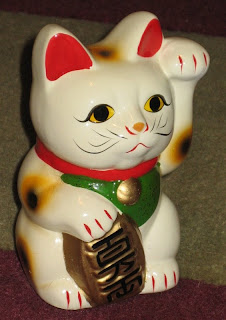 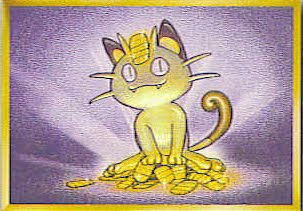 If you have ever seen a cat like the maneki neko above, then you have seen a Japanese Bobtail (Felis catus). As their name would imply, these cats are native to Japan, and have very short tails. They usually come in three colors (making them mikeneko- three-furred cats), but one- or two- colored specimens exist. (Given that calico/tortoiseshell patterns occur almost entirely in female cats, there better be some bicolored males out there!) 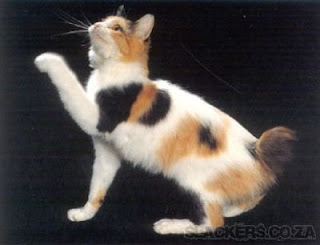 Now, being Japanese cats, of course there are interesting stories about them. The maneki neko supposedly made after a rich feudal lord was taking shelter under a tree during a thunderstorm. He saw the beckoning cat in the window of the temple, and went in. A minute later, the tree was struck by lightning. The beckoning cat became a symbol of good luck after the real cat had passed on.

There are also a few stories addressing the stunted tail of the Japanese Bobtail. One of my favorites involves the split-tailed nekomata, a monster cat which can raise and impersonate the dead. In order to prevent more of these monster cats from appearing, the bobtails were bred to have little to no tail - you can't split what isn't there, supernatural forces!

Besides a unique look, Japanese bobtails sport winning personalities. They are very people-oriented cats; like Siamese, they will generally speak when spoken to. They also love babysitting and watching their humans (if you have a cat, you KNOW this is accurate) clean the house for them. They can be leash-trained and taught how to play fetch. Unlike the similar Manx breed, their short tails come with no nasty defects...except, perhaps, hopping like bunnies.

The Shiba-Inu is supposedly one of the most catlike dog breeds. The Japanese Bobtail sounds like one of the most doglike cat breeds. Ladies and gentleman, even the pets are crazy in Japan.

Do I even NEED to mention that Hello Kitty is a Bobtail?
Posted by KuroKarasu at 5:33 PM