"They Actually Eat That": Xoloitzcuintle.

The Xoloitzcuintle - also called the "Xolo" or "Mexican Hairless"- is a breed of hairless dog from Mexico. Unlike Chinese Crested dogs, Xolos developed their hairlessness naturally - it may have been beneficial to have less hair to endure the hot tropical climate, even though dog skin has all the issues that human skin does. The Xolo has a counterpart in, but different standards from, another hairless breed in Peru.

In Mexico, hairless dogs were considered sacred messengers of the Aztec god Xolotl. They could guide souls through the underworld, and, like cats in Egypt, were mummified and buried with their masters. Even today, they are thought to heal the sick better than a regular therapy dog, and are kept as companions all across Mexico. The Xolo is Mexico's national dog.

They were also bred for meat.

I'm not 100% sure on this, actually. Despite its shocking nature, no one seems to have any images of modern Xolo meat. Americans usually think of eating dogs as being limited to China, but quite a few accounts from conquering Spaniards mention Xolos being served at banquets (possibly with corn). Xolo-killing was done en masse for fancy parties, religious rituals or as, ahem, yet another virility potion. Seriously, what WON'T people do to put junk in their trunk? 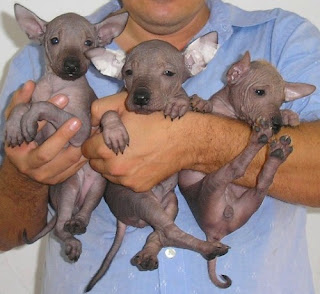 At the very least, they actually ate that. I am not sure if they still do or not. The internet has failed me when it comes to proving or disproving this claim. It might just be churned in from the rumor mill, but either way would not surprise me.
Posted by KuroKarasu at 8:36 PM

Email ThisBlogThis!Share to TwitterShare to FacebookShare to Pinterest
Labels: north america, They Actually Eat That