Props to whomever named these little guys. "Sparkling night lights" describes them perfectly. (I also adore the kanji used for them: "Night light bug." I also saw "umihotaru," "sea firefly.")

What, exactly, are these magical creatures? Edward Cullen's sweat? Disco lights from the abyss? The result of leftover acid from Mother Nature's cephalopod binge?

Actually, they're the first protozoan that I've ever done a feature on. Noctiluca scintillans is a single-celled organism that feeds on other, smaller organisms, such as plankton, fish eggs, and bacteria. Less-Latinate names for these little sparklers include "Sea Ghosts" and "Fire of the Sea." (I smell either a Ghost/Water or Fire/Water Pokemon coming up because of these...oh, wait, Nintendo has lost all creativity, and is hopelessly shilling its beloved franchise with far too many dragons and less species variety than before. Never mind.) 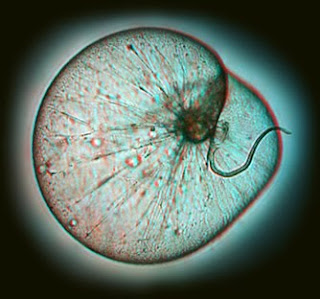 Wait, "dinoflagellates?" Your learned about those in biology class, didn't you? Those are the things that cause red tide!

Yes, yes they are. The glow that lights up the sea every so often is caused by a "red tide" population bloom of N. scintillans. Every time the sea lights up, millions of N. scintillans are all chowing down on an overabundant food source (usually phytoplankton). They are not toxic by themselves, and can produce a whole rainbow of eerily-glowing colors.

These guys glow for the same reason that fireflies do: They produce the enzyme luciferase (which is totally NOT related to Satan, haha) and flash it whenever they feel threatened. Hey, if you've got it, flaunt it.