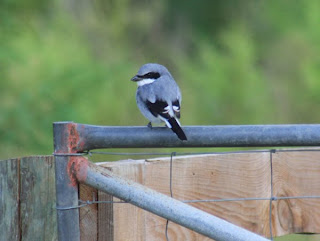 Awww, isn't that the cutest little songbird that you've ever seen? It's a loggerhead shrike (Lanius ludovicianus). Instead of being flashy or having a pretty voice, the shrike attracts his mates with presents that he's hoarded.

These "presents" include dead animals that have been skewered on thorns, barbed wire, or anything else pointed. Their prey ranges from insects (including the lubber grasshopper, whose poison deteriorates after baking) to lizards, all skewered and waiting to be eaten. The genus of shrikes is, after all, called Lanius - Latin for "butcher." Check out how they hunt in Israel...and the end result!

Shrikes are not the only birds to utilize this technique. The real butcherbirds are the members of Cracticus, which resemble Australian magpies. Even its scientific name sounds, well..cracked. Look up any member of the genus and you find stuff like this:

These butcherbirds are native to Australia and Asia, which of course led to at least one pop culture reference: 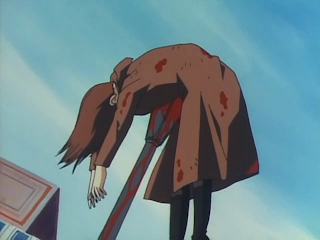 From Devil Lady episode 15. Since the show is not only Japanese but also refers to crows, it is DEFINITELY talking about the Cracticus butcherbirds.

What? Nobody would ever do that for real because it is so darn twisted? Think again. Vlad the Impaler, a Romanian prince, was known for torturing people by leaving them to die on stakes. Most of you probably know about him via Bram Stoker's Dracula - the price's real last name.

He must have been a shrike in a past life, not a bat.
Posted by KuroKarasu at 8:49 PM